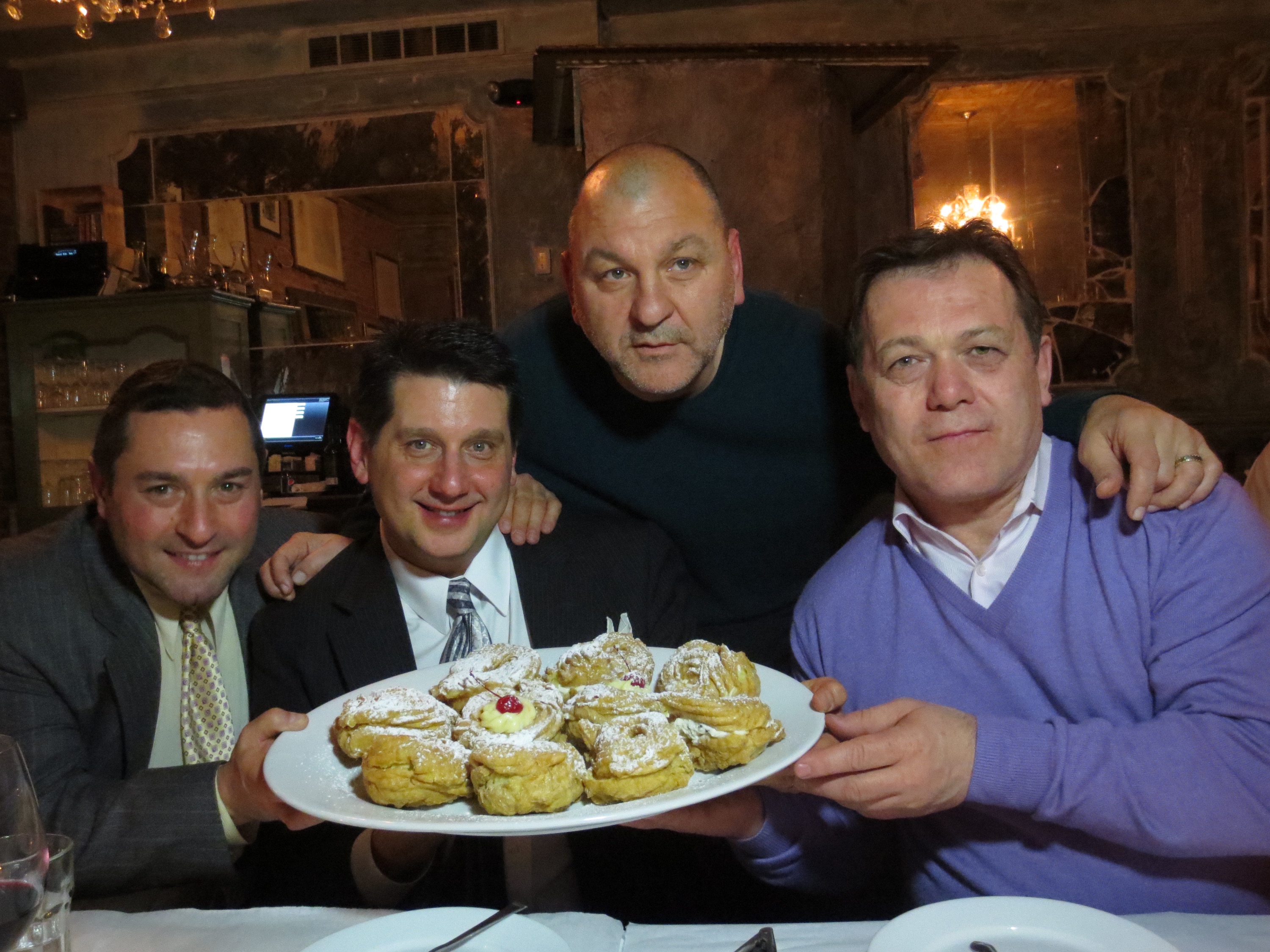 THE ZEPPOLE
During the Middle Ages, there was drought and famine in Sicily. Praying to their Patron Saint Joseph, Sicilians begged for rain and promised a bountiful feast if they were rewarded with water. After their prayers were answered, the feast was prepared and fava beans, one of the few things to survive during the drought, were featured prominently. Though the legumes helped save the Sicilian people, the most famous and more liked pastry called La Zeppola Di San Giuseppe from Naples, not Sicily, is the food most associated with the Feast Day of St. Joseph.

Traditionally, the Neapolitan Zeppole di San Giuseppe are fried in Sugna, which is rendered lard. In Naples and the surrounding areas, the Zeppola (Zeppole is Plural) must be fried (and eaten, obviously) on the Feast Day but you can also find a baked Zeppola. The baked versions of the Zeppole di San Giuseppe are even more popular outside of Italy, where people want them for the month leading up to the Feast and even sometimes year-round. To have the Zeppole di San Giuseppe more readily available and able to last longer, baking, and not the traditional frying, is preferred for maintaining the structure and integrity of the cooked dough but nothing compares to a well fried (Italians are the Masters of Frying) Zeppola, filled with Crema Pasticcera on March 19th of every year.

Crema Pasticcera is Pastry Cream, which is custard, made with eggs, sugar, cornstarch (sometimes), milk, vanilla, cream, and flour. Crema Pasticcera is the traditional and best filling for the Neapolitan Zeppole Di San Giuseppe, whether they be fried or baked.

In the United States, you can also find these Zeppole filled with Cannoli Cream or Bavarian Cream. While I like both variations, they are not the traditional Neapolitan pastry known the world over. Sicilians, on the other hand, make Gli Sfinci di San Giuseppe. Sicilian Sfinci made to honor St. Joseph are similar to Naples’ St. Joseph’s Zeppole but have a different form and are filled and topped with Sicily’s favorite filling, Sheep’s Milk Ricotta . The Ricotta cream is also used to fill the famous Sicilian Cannolo (Cannoli is plural). Some recipes even call for potato to be added to the dough.

To clear up the confusion,

Crema Pasticcera = Pastry Cream (Custard) used for the traditional Neapolitan Zeppole di San Giuseppe and many other desserts, as well.

Cannoli Cream = Sheep’s Milk Ricotta (though, in the States it would be Cow’s Milk) used to fill Cannoli and also the Sicilian Sfinci di San Giuseppe.

Bavarian Cream (Similar to Boston Cream) is like a more firm and gelatinous custard that, in the United States, can also be used to fill Zeppole Di San Giuseppe.

Crema Chantilly = Sweet Whipped Cream with Vanilla. Though many Italians call Whipped Cream in general “Crema Chantilly”, this cream must technically have vanilla. Crema Chantilly is not used for Zeppole di San Giuseppe but is usually seen in other desserts, most famously the Coda D’Aragosta (Lobster Tail in English), which is an elongated Sfgoliatella, whose shape resembles that of Lobster Tail.

In the photo, we see the Zeppole di San Giuseppe made by my friend Emilio Vitolo of the famous Emilio’s Ballato restaurant in Manhattan, New York. It was one of the many images from that memorable and super-fun Dinner with Nick Stellino at Emilio’s Ballato. At the table with me were Emilio Vitolo (Owner Of Emilio’s Ballato), Roberto Caporuscio (Master Pizzaiolo), the Men Who Dine (Alan Watts and Gennaro Pecchia), Nick Stellino (Super Star TV Chef), Mike Colicchio (Big-Time Accountant), Lou Manna (World Renown Food Photgrapher), and Joseph Diaz (Super Talented Videographer). We celebrated on the day of another famous Saint, Patrick, on March 17, 2014. Everyone loved the food and we finished off with Emilio’s Zeppole di San Giuseppe, which he makes the old fashioned way, fried in Sugna. He makes both the traditional Zeppole di San Giusppe filled with Pastry Cream and also Zeppole with Cannoli Cream. Here is a video of that great night.

Zeppole in the United States are usually known as fried balls of dough that are sweetened with powdered sugar. While I absoltely love those, if made well, most Zeppole in Italy are served as savories, meaning salty and not sweet. They can be minimally stuffed with seaweed or zucchini flowers or anything making for good finger food. When made properly, they are great without anything added to them. The only sugary, fried dough you would really see are called Graffe, which are more like our doughnuts. There are also many types of Zeppole shapes.

THE DAY
Every March 19th, I love to note it is St. Joseph’s Day. As the father of Jesus, Italians celebrate this day as Father’s Day and not in June, like we in the United States do. Religion and Culture are so intertwined in Italy, and Southern Europe, that you can see that not only did they progress together, but they helped each other progress. In fact, those two things together are why those Cultures have been so successful. Italians have been great at many things for many reasons, but Family is the most important one. It is a reference point and a Foundation of Strength. The anti-Human Hegelian Dogma and the diabolical Dialectical Materialism, that so drown our Society and Culture, have done a terrific job at destroying all that has been Beautiful, Truthful, and Eternal, but when this is all over, Good will always prevail. Nothing can take away the importance of Reality. And the reality is Joseph SACRIFICED everything for a Foundation on which to build a Future. No State can ever replace that. It is noble to to believe in Family. It is Scientific to have Faith in it. Happy Father’s Day.