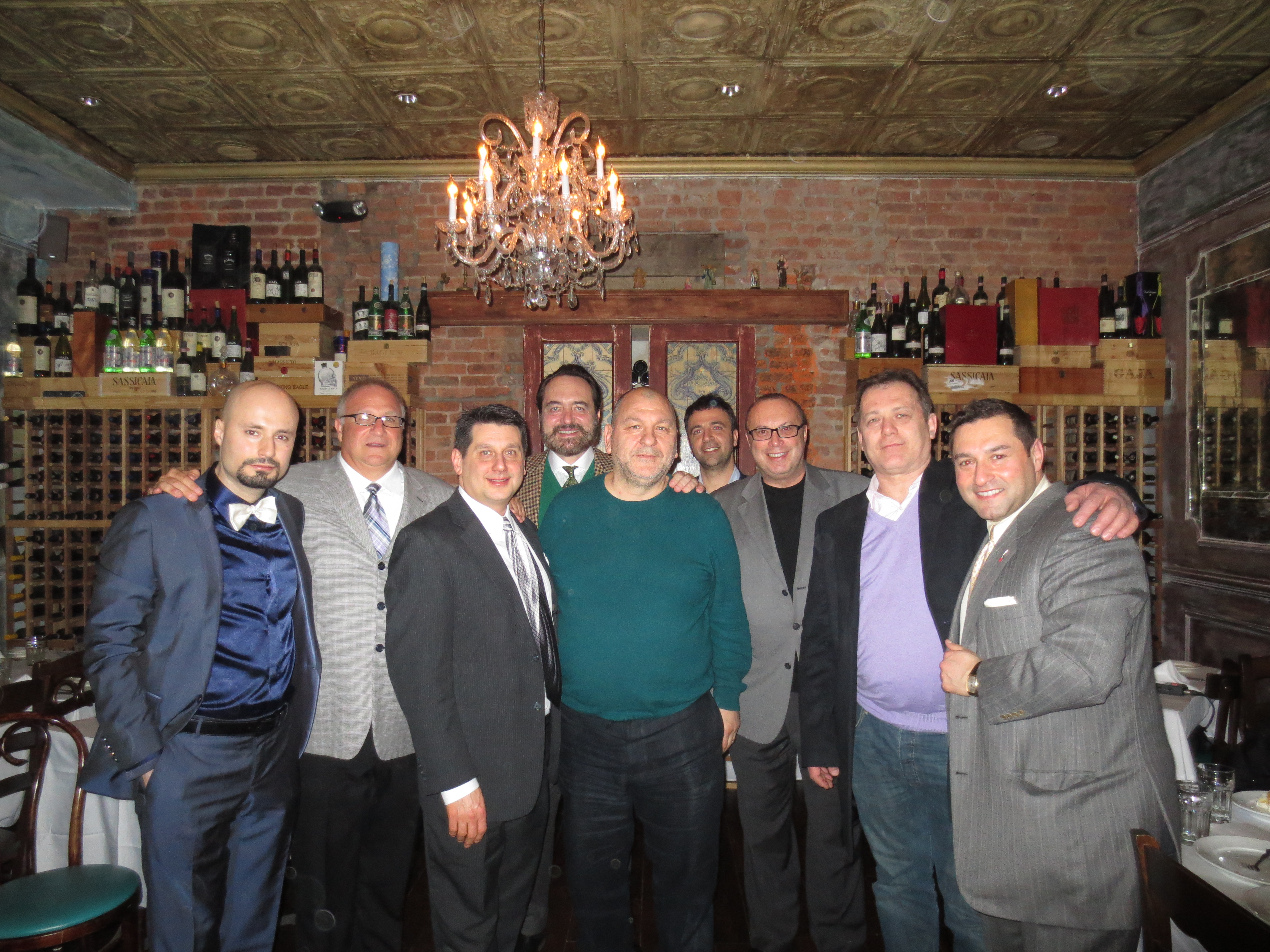 I get a message CC’d to me by Mike Colicchio about organizing a bunch of fellow troublemakers to honor Nick Stellino with a dinner. It was Mike’s great idea and the the job of making it happen was given to the Men Who Dine, Alan Watts and Gennaro Pecchia. The plan was to go all out. Get dressed to impress and meet on St. Patrick’s Day, a nice Irish Day for Italians to get together and eat Italian food. The excitement grew as we went back and forth messaging each other, and for more times than once, Gennaro being urged to do a dance or do something “Gennaro-esque”. Everything seemed good to go but we still did not pick a place! Alan proposed “Emilio’s Ballato” for the event. It was a done deal.

The old school joint, once a favorite of all the big names, went through a down period. In the very early 1990’s, Emilio Vitolo took over a restaurant whose glory days were long gone, and spent two decades building it back up. Seven days a week in the restaurant business is enough to kill most people, but to Emilio it’s all fun and games. He lives off the satisfaction of his customers, the most famous leaving their kind words and signatures on large, canvas rectangles hung all around the restaurant. He always wants to know if the customer enjoyed the food and had a good time. The Nick Stellino dinner was no different.

The goal for the night was to “do it up”. Mike Colicchio suggested we “dress to the nines” to match up to Nick Stellino’s well known elegance. Gennaro was on board just by being Gennaro. I knew it was a special evening so I decided to wear part of my wedding suit. It was not a traditional Tuxedo, as most Americans would wear for their special day, but a dark blue suit, that could be worn for any other formal event. I got married in Italy so it worked. For the daytime part of the wedding, I had a vest and ceremonial tie, but for the evening, I changed into a darker shirt with one of the light colored bow ties I purchased. I was planning on going with the nighttime outfit. I had a very light fuchsia bowtie and a simple but bold white one. Which to choose? When my Italian mother and Italian wife heard I was planning to wear my wedding suit, they scolded me. I almost did not make it out alive. For support, I immediately texted Gennaro, who insisted I do what he does best: Live it up. Life is meant to be lived.

Getting out of a cab on East Houston, I spot the Men Who Dine standing in front of Emilio’s with Joe Diaz, their new and talented video man who works for PF Films alongside another great media man, Peter Ferriero. It was perfect timing for a great opening shot. We hug each other and walk around the block, all the while filming it. We walk in front of John Gotti’s old hangout, that is a cupcake store now or purse store, or who knows what. And then boom! We bump into Jay Kos, one of the very few American designers I appreciate. Since his days on the Upper East Side, I admired his work. His move to downtown opened up the way to express his talents he was culturally prohibited from displaying uptown. Of course, Gennaro, who knows everyone, knows Jay Kos. We chat for a bit. We get hungrier. We go into the restaurant. 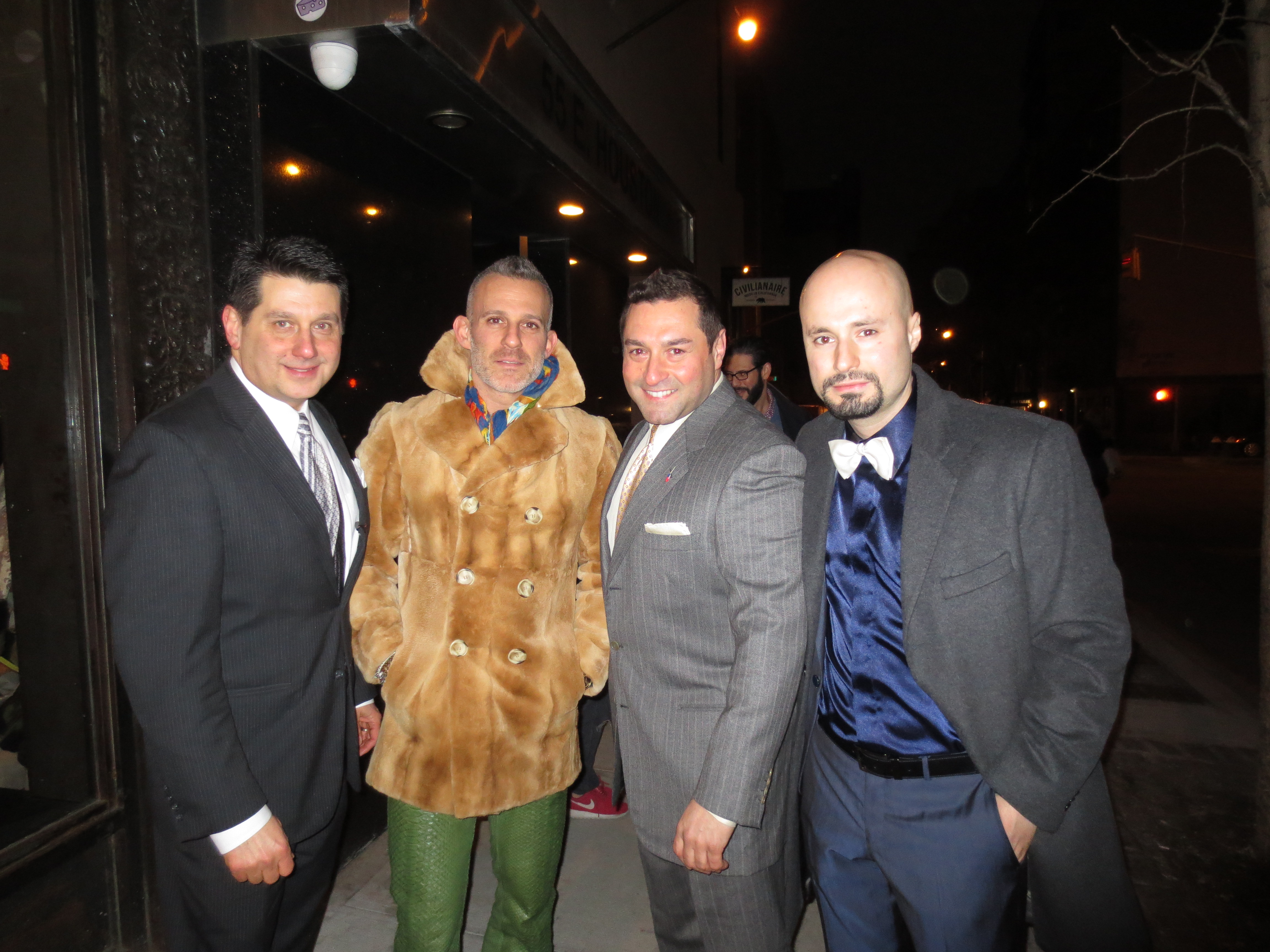 Emilio was where he always is, at the first table when you walk in. He greeted us enthusiastically and led us to the back room where we were to have the banquet and bacchanalia. Lou Manna, world class Food Photographer, was already waiting there and drinking wine. He got an early start by popping a wine I sell at my store called Odoardi Terra Damia. It’s a blend of local Calabrian grapes such as Gaglioppo, Nerello Cappuccio, Magliocco, and Greco Nero. I am usually very much against oaked wines but this wine, which was heavily oaked, was somehow masterfully balanced and actually quite enjoyable. I hand sell these wines at my place, letting customers know that though it goes against my wine convictions, I find it amazing. Lou Manna had it ready for us. He poured me a glass as he coached me on Food Photography. Keep in mind, though I know how a shot should “look”, I barely know how to turn the power button on, so Lou’s patience and insight were greatly appreciated.

In comes the organizer Mike Colicchio, smiling and excited. He’s looking great, after transforming his life by a change in diet and lifestyle. He’s radiating, and tonight was going to be an exception to his diet. No Wine, No Gluten, No Dairy….to hell with it. Tonight we eat. Then comes Roberto Caporuscio, one of the top pizza makers in the World and owner of Keste and also Don Antonio. He helped make Pizza History in America, so it was great to eat Emilio’s appetizing Pizza Marinara in his company. But where was the man of the hour, Nick Stellino?

He probably had to duck to walk in; the tall TV Chef, who captivated millions of followers since the early 1990’s with his touching personal stories, comes as his usual well dressed self, with a huge smile. NOW we can eat! 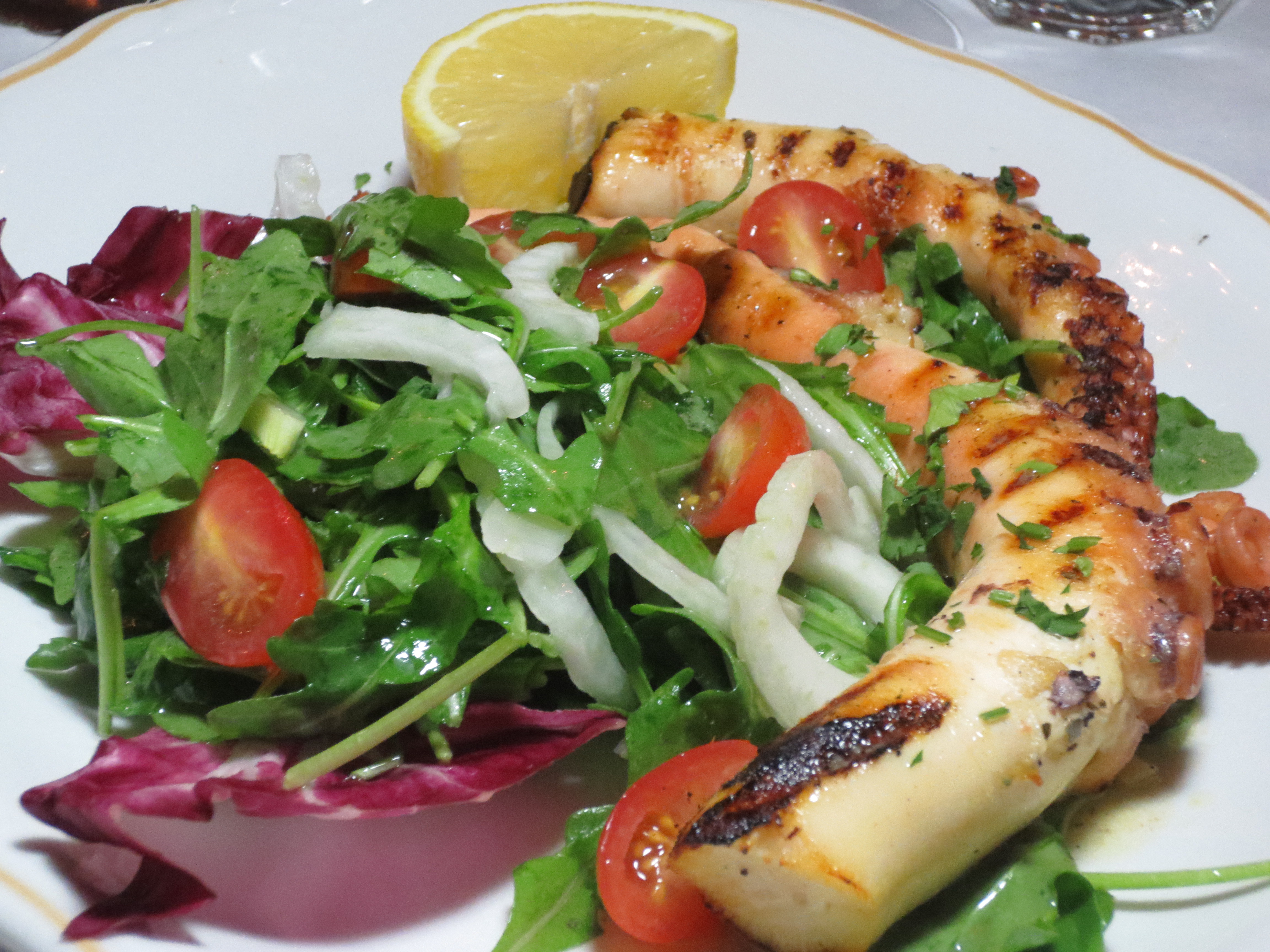 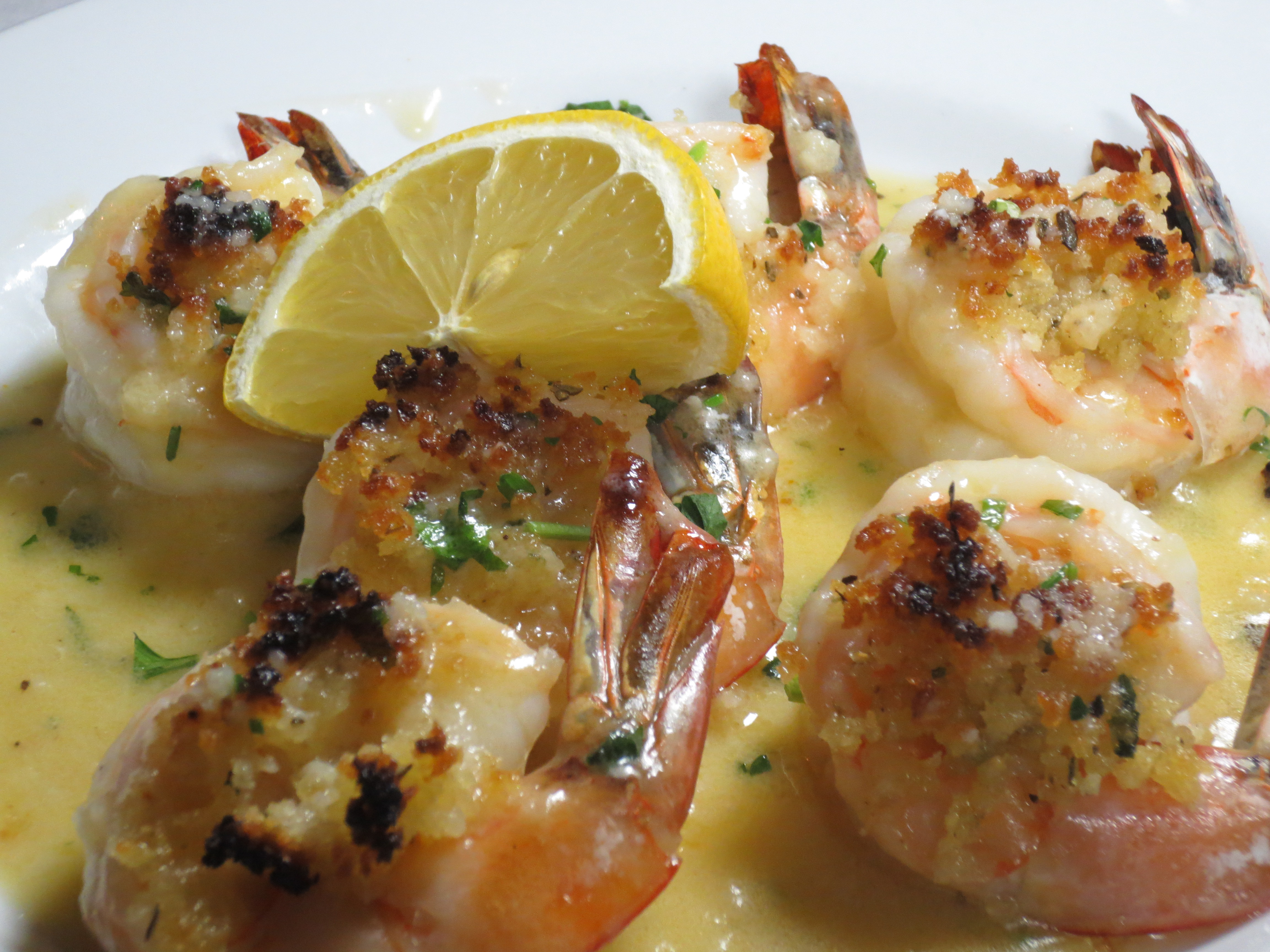 There is no way I could remember all the great dishes that came out of Emilio’s kitchen that night. I managed to take some photos, but not of all the different things we tried. If memory serves me correctly, we started with a Pizza Marinara, which was simple, with tomato sauce, garlic, oregano, and basil. Then came the octopus, which was tender, along with beautiful shrimp, and clams as well. Everything was mouthwatering. Then came the pastas, one with garlic and oil, the other with tomato sauce. It is very hard to pull off simplicity but Emilio did it. Shortly after came the meatballs, and as requested by Nick, sausages and broccoli di rape. 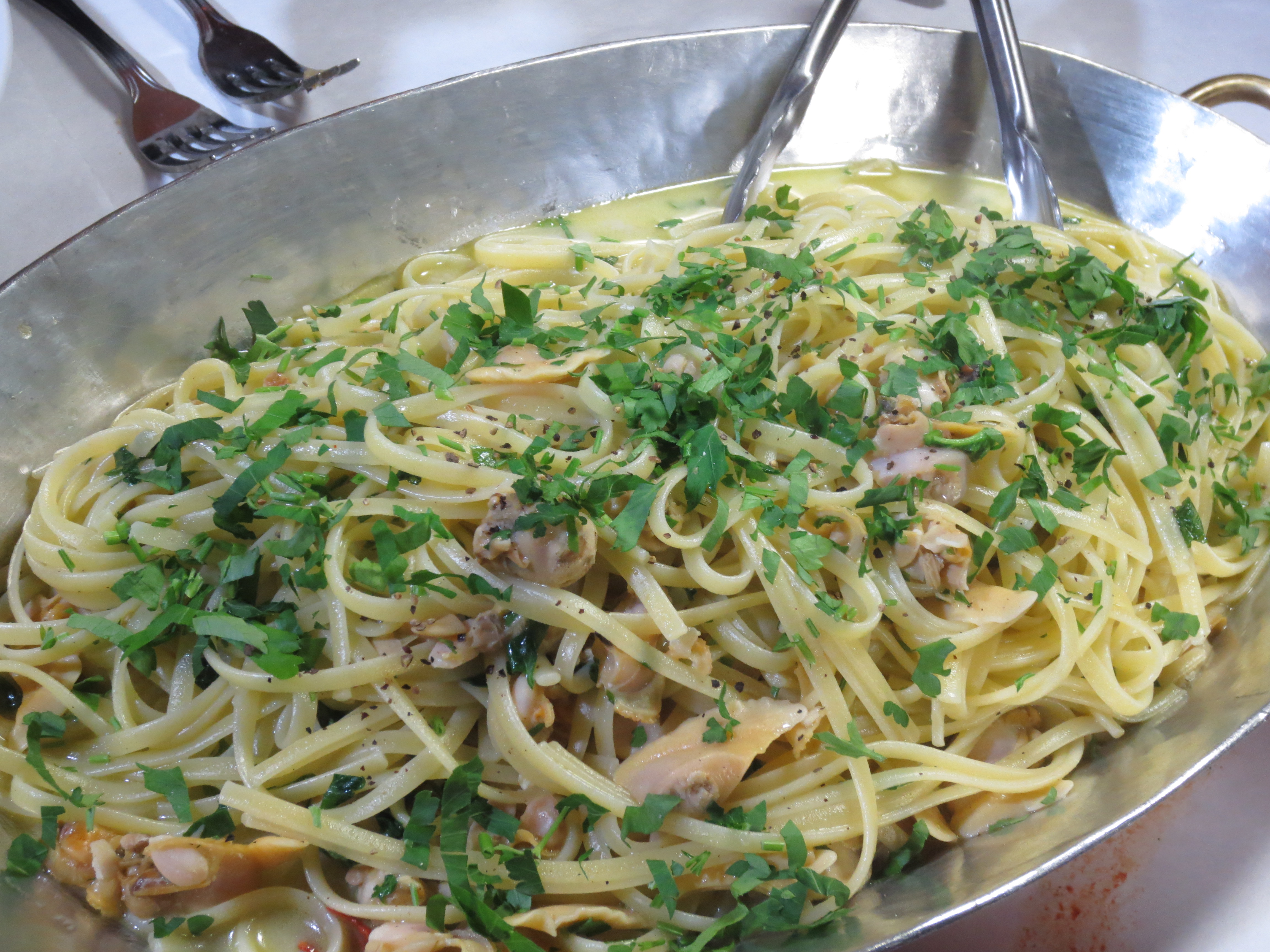 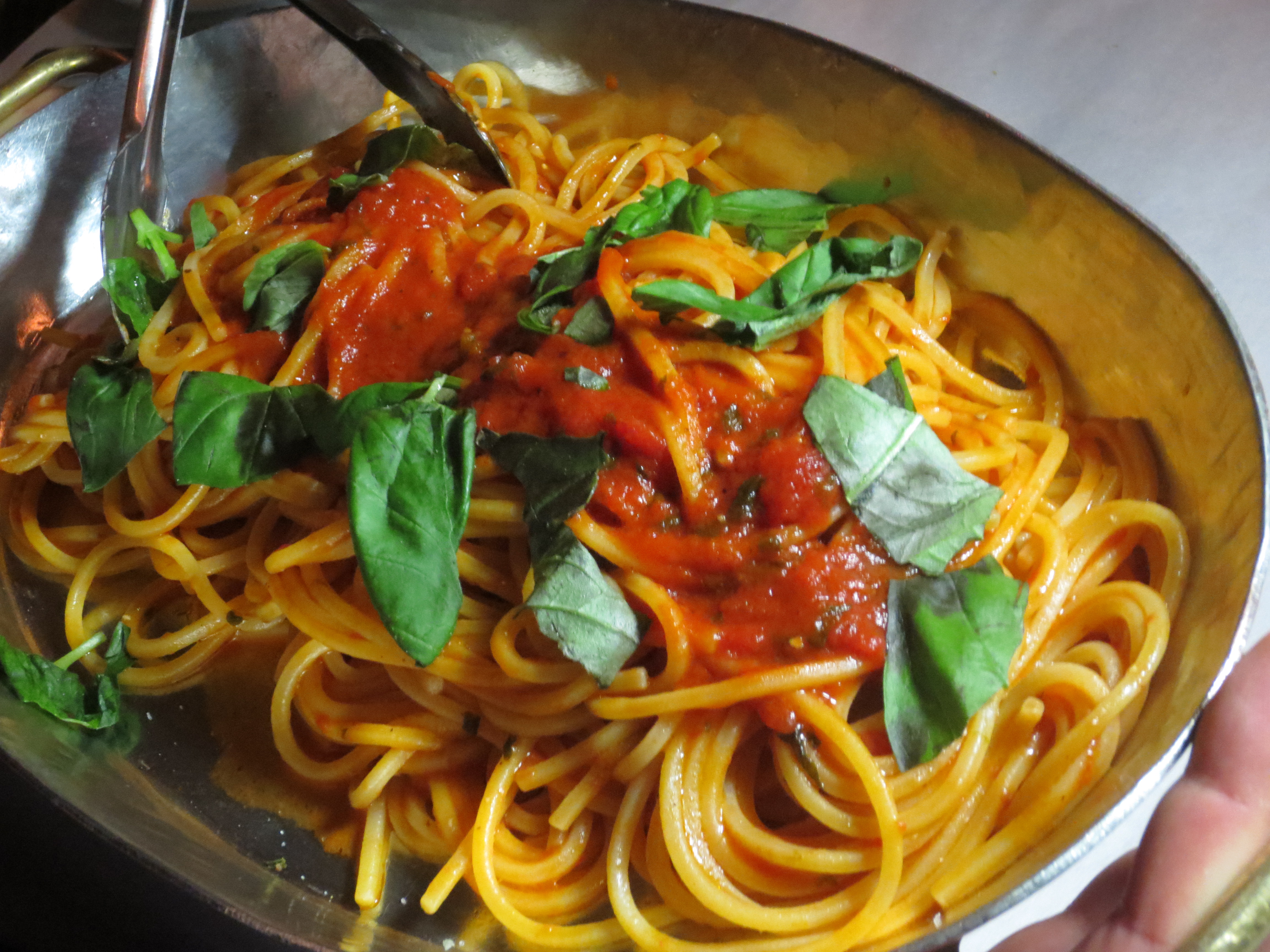 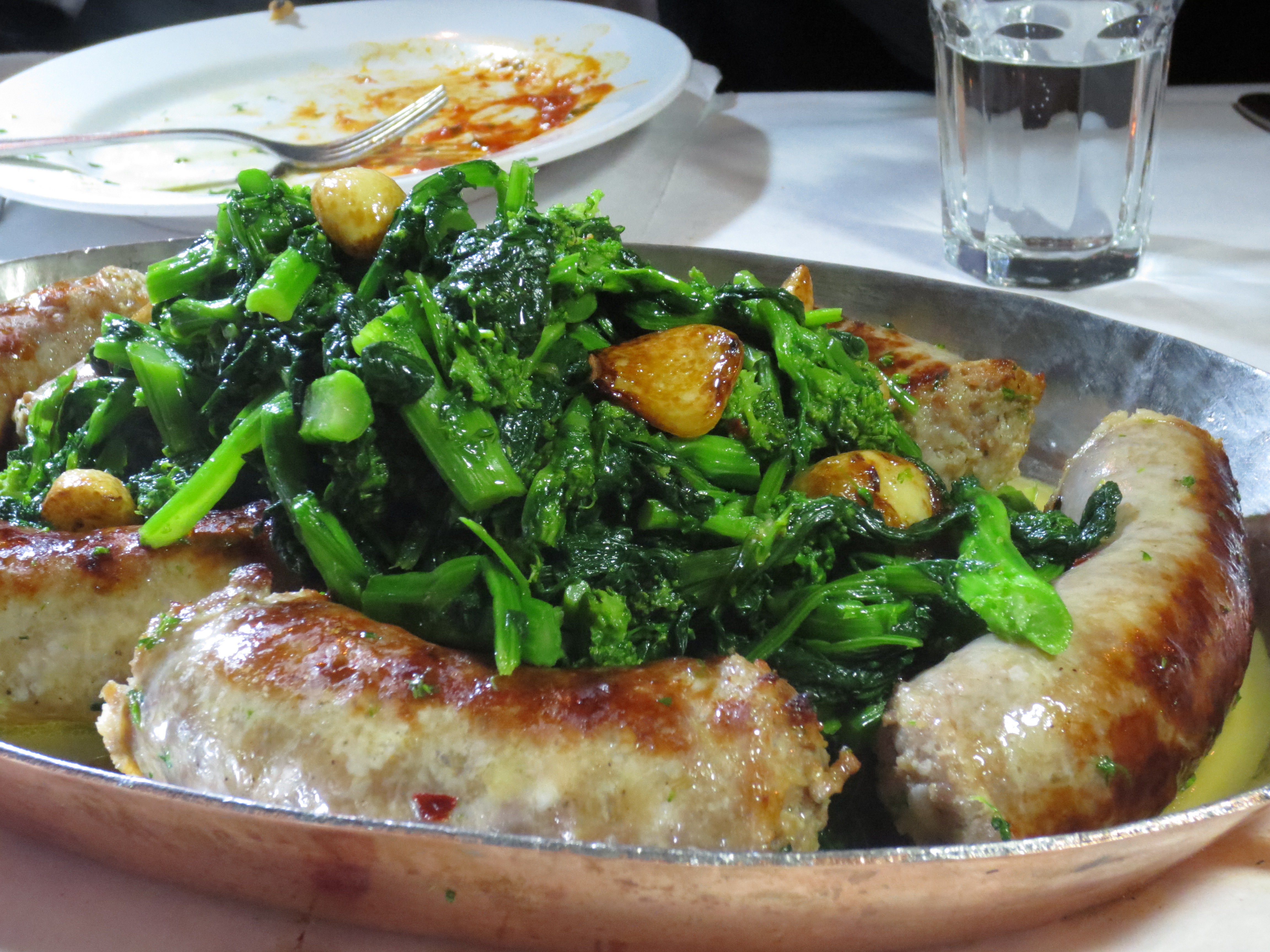 The pork and leafy vegetable combo was probably my favorite of the evening. In fact, Roberto comes to Emilio’s often and asks him to make this dish, made so well it reminds him of his mother’s lunch she would pack for him back in Italy.

At some point, Emilio asks if we would like some Chicken Parmigiana. I wanted to shout, “What? No!”. Growing up in a traditional Italian household, la Parmigiana is done with either Eggplant or Zucchine. Once and a while, to be “Italian American”, my mother would make us Chicken Parmigiana, but it was never something I ever craved. I was gladly shocked when Emilio brought out the best…yes, the best, Chicken Parmigiana I have ever had. It was juicy, soft, and just lightly and perfectly coated with enough sauce and cheese to help boost flavor. It was exceptional. If all Chicken Parmigianas were that good, I would give in and eat it regularly.

Many don’t know this but Emilio used to be a pastry chef at Ferrara’s since he was a boy. He proudly brought out his “Zeppole di San Giuseppe”, a St. Joseph’s Day pastry eaten every March 19, Father’s Day in Italy. Yes, religion is THAT tied into Italian culture that Father’s day was specifically made to fall on a day honoring St. Joseph, Jesus’ step-father. To further increase our risk of diabetes, he brought out cannoli he proudly made, which were also terrific. 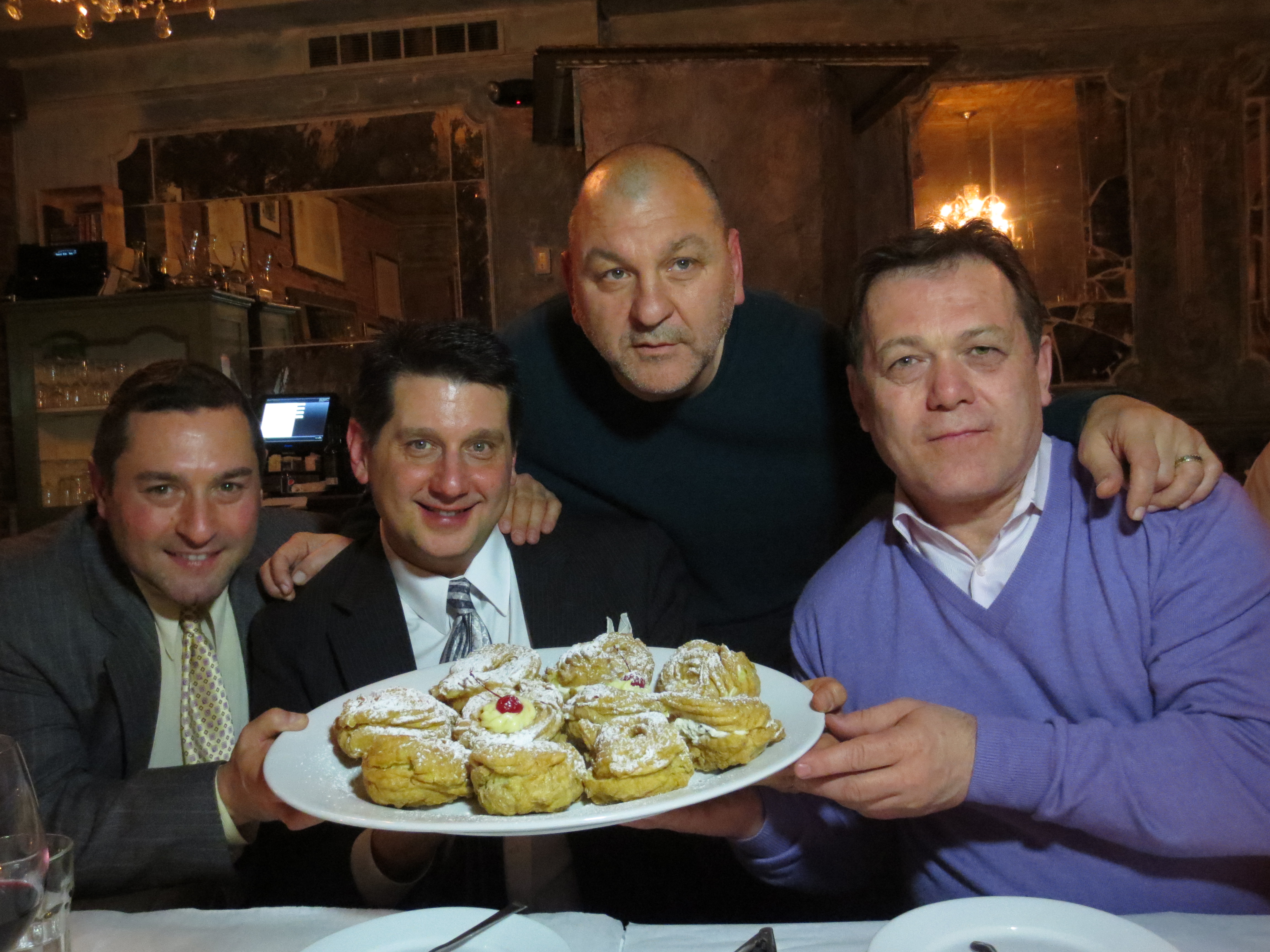 The food and wine were all first class but the company and the shared stories were by far the most beautiful. Not in the video was an emotional point Nick was making about the importance of family, tradition, and gathering around the table, as we were doing that night. It almost felt like the Last Supper. Emilio told us about his struggles to take over a dying place and with passion (an overused word but in this case works) and discipline, he built it up to what to where it currently stands. Going back and forth with Nick, Emilio voiced his concern about the new generation and their lack of work ethic and hunger. Worrying if his children will follow well in his footsteps, the always optimistic Nick Stellino assured Emilio Vitolo that what he does day in and day out at the restaurant will be picked up by his children. Nick firmly believes that the next generation takes note of great work by great artists like Emilio and that we were all in the same boat when we were younger and our parents may have felt hopeless about us. It’s a circle. And the circle we formed around the table that night was filled with great food, great wine, great company, and stories that will be remembered forever.

Side Note: For a more in depth look at Nick Stellino check out my interview with him.
Side Note 2 : I hyper linked the Video on youtube but I will try to post it here below. I have been having problems with directly embedding the actual videos on WordPress. If not, just click on where it says “video” in highlights. 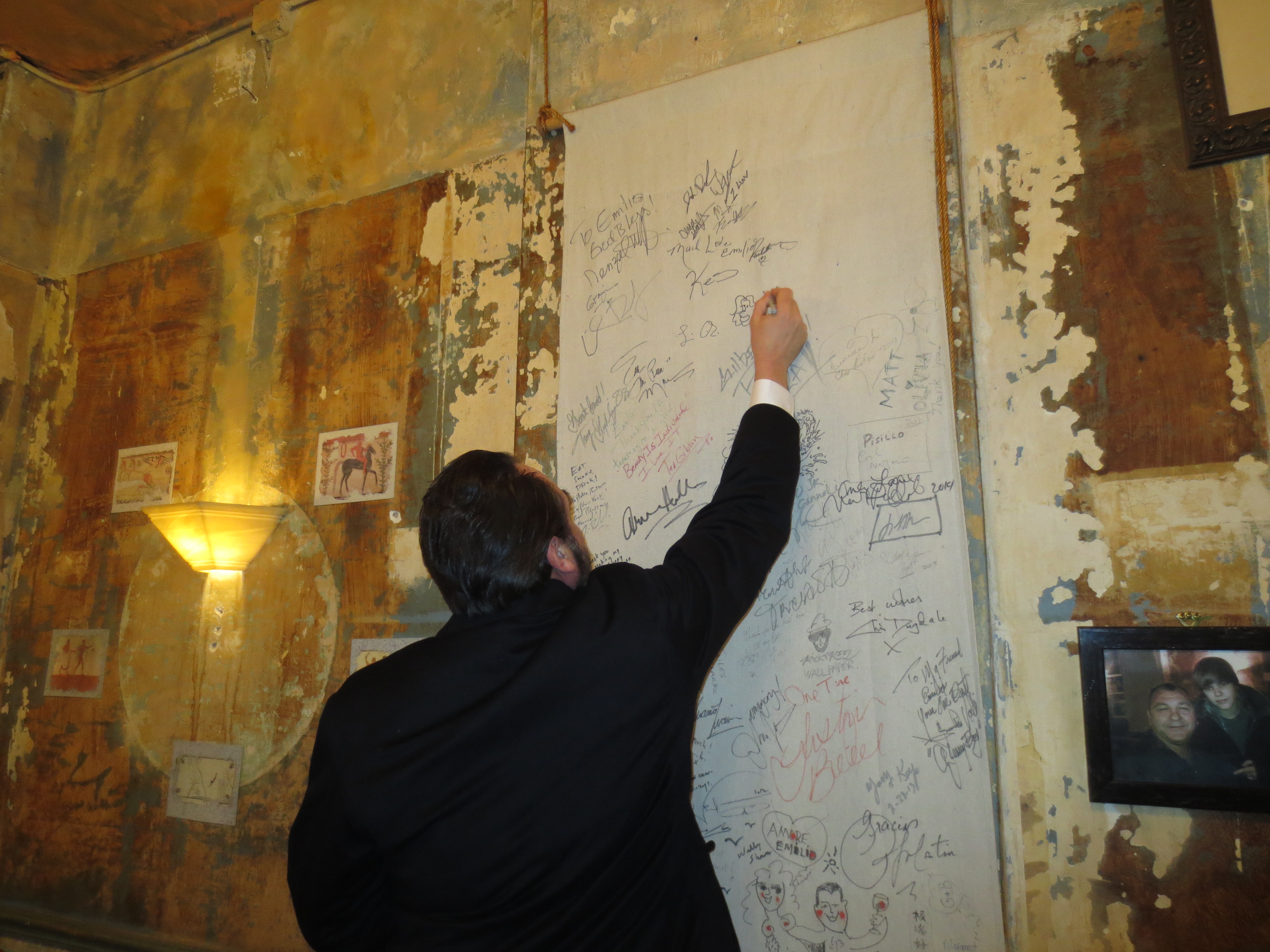 One thought on “The Nick Stellino Dinner at Emilio’s Ballato”