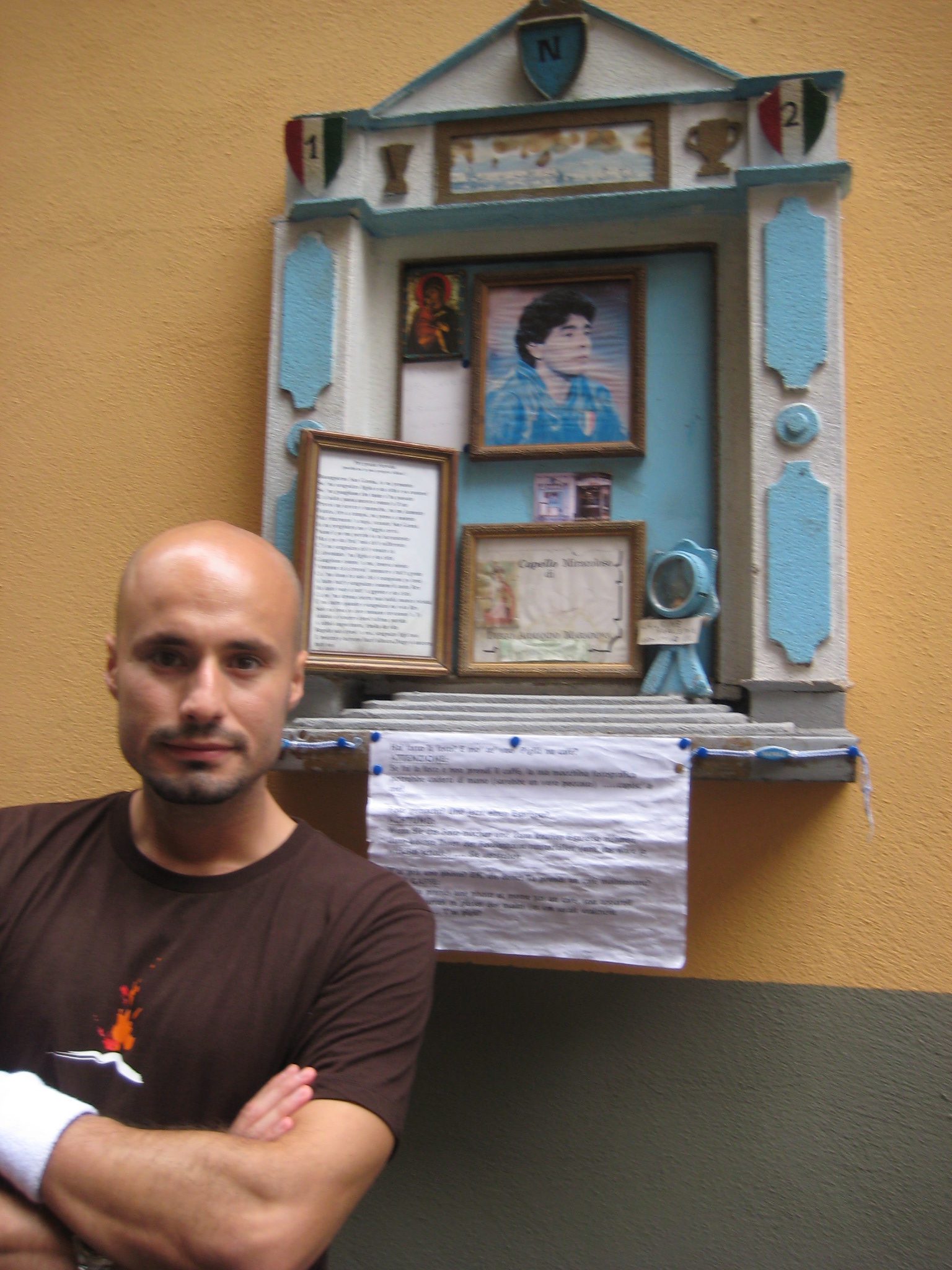 ” Diego was on top of the world, and he brought Naples there with him. “

This picture says it all. There is an altar for Diego Armando Maradona in his adopted city, Naples. And for the record, it is Naples, Italy, not Naples, Florida, or anywhere else. And for the record, let me apologize for putting Naples in Italy. The Neapolitans view themselves as a separate entity. So who is Maradona and why is he a sacred figure in Naples, Naples?

Naples, like the rest of the country it happens to find itself in, is crazy about soccer. But Neapolitans always over-do everything. So if it’s good, in Naples it is the best. If it is bad, in Naples it would scare the Devil. I never did hallucinatory drugs, but if I did, I bet the experiences would resemble a day in Naples. The food is amazing, the weather is hot, the women are even hotter, the clothes are the best, the city is on the water, Art is in the air Neapolitans breathe and in the blood that pumps through their veins, and the people will befriend you instantly.

Naples always gets a bad rap. Sure, we all must take responsibilities for our own actions, but many of the bad things that happens in Naples and to Neapolitans are the results of hundreds of years of political abuse and La Camorra, Naples’ Mafia. What was at one point the world’s most elegant city, filled with love of Art, Literature, and Science (among many other great things) has been reduced to a Petri dish, where the powers that be dump their garbage on the streets and the all-to-ready media jumps to categorize Naples as a hell-hole. As Neapolitan singer Nino D’Angelo says in his song “Jamm’ Ja'” : Nuie simm’ a casa de vase e carezze, Ma fa nutizie sultanto a munnezz’ ( We are the home of kisses and hugs, but only the garbage makes the news ).

So where does Diego Armando Maradona fit into Naples? The Argentine was and continues to be a rebellious figure. He came from “the streets” and worked his way up, sometimes appearing (and sometimes actually being) irreverent, but always putting on a great show with style and skill. Irreverent. Style. Skill. Showtime. THAT is Naples and Maradona personified the city. He even felt at home there, comparing Naples to cities back in Argentina.

Neapolitans, just like Italians but more so, love to play up ANY foreign influence, sometimes to the point of making one up if they need an historical explanation for why they have a certain custom. During his soccer career, Maradona was nomadic going from club to club. After retirement, he continued his country-hopping as coach. His “outcast” character was well embraced by Neapolitans, who saw in the super star player themselves.

With a long History of facing discrimination by Northern Italians and Neapolitans sometimes throwing fuel on the fire, the “us vs. them” mentality is a back and forth game that can be funny at best, and dangerous at worst. Among the worst enemies was a team from the North called Hellas Verona, whose fans, along with other Northern teams like Bologna, hold up, and still continue, banners that mock Neapolitans who travel there for “away” games. Considering the Southerners unworthy of being Italian, the Northern Veronesi “welcomed” the Neapolitan fans to their home stadium with a famous banner that read, “Benvenuti in Italia” (Translation: Welcome to Italy). Other banners went even further, stating: “Vesuvio, Pensaci Tu” (Vesuvius, take care of them) or “Vesuvio, Lavali col Fuoco” (Vesuvius, Wash Them with Fire). Never failing to call Neapolitans “Terroni”, one banner expressed disgust and read “Lavatevi” (Wash yourselves). Neapolitans were never known to back down but are famous for making jokes,so they would fight back with banners such as “Giulietta e ‘na Zoccola” (Juliet is a whore), mocking Verona’s most famous damsel. A little funny side note here: There’s a great picture of Maradona in his Napoli uniform posing with his Argentine National teammate Claudio Caniggia in his Hellas Verona uniform, the club for whom he played at the time. More on Caniggia later. But not all Northern teams hate Napoli. Genoa (as North as you can get) is proud of “il gemellaggio” (the twinning) it has with Naples. Roma (my team) had a strong friendship with Napoli that unfortunately ended in 1987 when Salvatore Bagni gave Roma fans an “f you”.

For the South, finally having a team like Naples that was stacked with talent and competing on the international level, was manna from Heaven. Suddenly, everyone in the South of Italy became a Napoli fan, cheering them on as they broke records.
Napoli finally won its first Scudetto (Italy’s League Title) in 1986/1987 and its second in 1989/1990, finishing second place in ’87/’88 and ’88/’89, and third place in ’85/’86. So, from the beginning of the 1985 season to the end of the ’89 season in 1990, Napoli was always in the Top 3. This was unheard of and Diego Armando Maradona got all the credit. He became a saint in Naples and could do no wrong. Naples went on to also win
the Coppa Italia in 1987 and the Super Coppa in 1990. To top it all off, in 1989, they took home Europe’s second most coveted prize, the Uefa Cup. It was a magical time for Naples and their hero Maradona, who also went on to win a World Cup for his home country, Argentina, in 1986.

Diego was on top of the world, and he brought Naples there with him.

For Neapolitans, this was a chance to be taken seriously as valid competitors with their own things to share. Napoli winning the Scudettos and all the other Championships was like the whole South won. It validated what the “terroni” were feeling forever: “just give us a chance”. The 80’s was a magical period for Napoli soccer. Besides having the best player in the world at the time bring attention to an otherwise unknown team on the international stage, the Napoli club boasted superb talents and beefed up their roster with giants such as Careca, Carnevale, De Napoli, Ferrara, Bagni, Giordano and, later on, the dazzling star Zola.

In the 1980’s, most teams’ uniforms were produced by ” NR ” (or ennerre, later changing its name to ennedue). Giants from teams like AC Milan, AS Roma, Fiorentina, and Lazio etc also wore the NR uniforms, but the one people first remember and want the most is the # 10 azure-colored jersey made famous by Diego Armando Maradona.

A game at San Paolo, Naples’ home stadium, is not for the faint of heart. To this day, when Napoli scores, the earth actually trembles from all the jumping up and down and screaming the fans do. And when Maradona was playing, firefighters and police were regularly called by Neapolitans living outside the stadium out of fear of an earthquake. The tremors would register on the seismograph !!! Before the games, the stadium is covered in colored clouds of smoke from flares and smoke bombs. The fans put on a show equal to the one the professional players put on on the field.

Ya Ya Toure, who has played for mega teams with intense fans such as Barcelona and Manchester City, was shocked at what he felt at San Paolo. He said his “legs were shaking” from all the noise and boos shouted from the fans. He then realized that “for the Neapolitans, it is not just a team, but a visceral love, like the one between a mother and child ! It was the only time that after having lost a game, I remained on the field so I could enjoy the show”. Napoli fans are among the most dedicated, filling the stadium for every home game. For decades, they have had one of the biggest home attendances in the world, even when they were relegated to the lower divisions, Serie B and Serie C.

It was this fan intensity and Maradona’s relationship with them that provoked the Argentine super star to ask Neapolitans to root for Argentina AGAINST Italy in the Semi-Final for the World Cup in 1990 at San Paolo. OF ALL PLACES to play the game ! While Neapolitans wanted Italy to win, they refrained from booing Argentina or Maradona, something that did happen at every other stadium they played in Italy. As mentioned earlier, Claudio Caniggia, a super-fast Argentine Forward who played his club football in Italy, was the first to break Italy goalkeeper Walter Zenga’s perfect record that night at the San Paolo. To this day, Zenga’s is the longest run of goalless minutes in World Cup history. The record could be said to have been broken by Gigi Buffon, another Italian star goalkeeper, but an own-goal and a non-action goal (penalty) took that chance away. If any team in history deserved to win a World Cup but didn’t, it was the Italian National Team of 1990.

Maradona’s Argentina went on to the finals but lost to (West) Germany. It was “third time’s a charm” for the Germans after losing to Italy in 1982 and to Maradona and his teammates in 1986. That ’86 World Cup in Mexico, Maradona will forever be remembered for two things: Cheating by scoring with his hand, which he said wasn’t his but the “hand of God” and then scoring what was deemed “the goal of the century” only 4 mintes later. It was classic Maradona: Doing something that solidifies your bad reputation and then make up for it by offering the world a dazzling display of brilliance. That is also Classic Napoli.

The title for this article was originally “What Maradona Meant For Naples” but I used “means” instead of “meant” because he continues to hold a magical place in Neapolitans’ hearts.

One thought on “What Maradona Means For Naples”