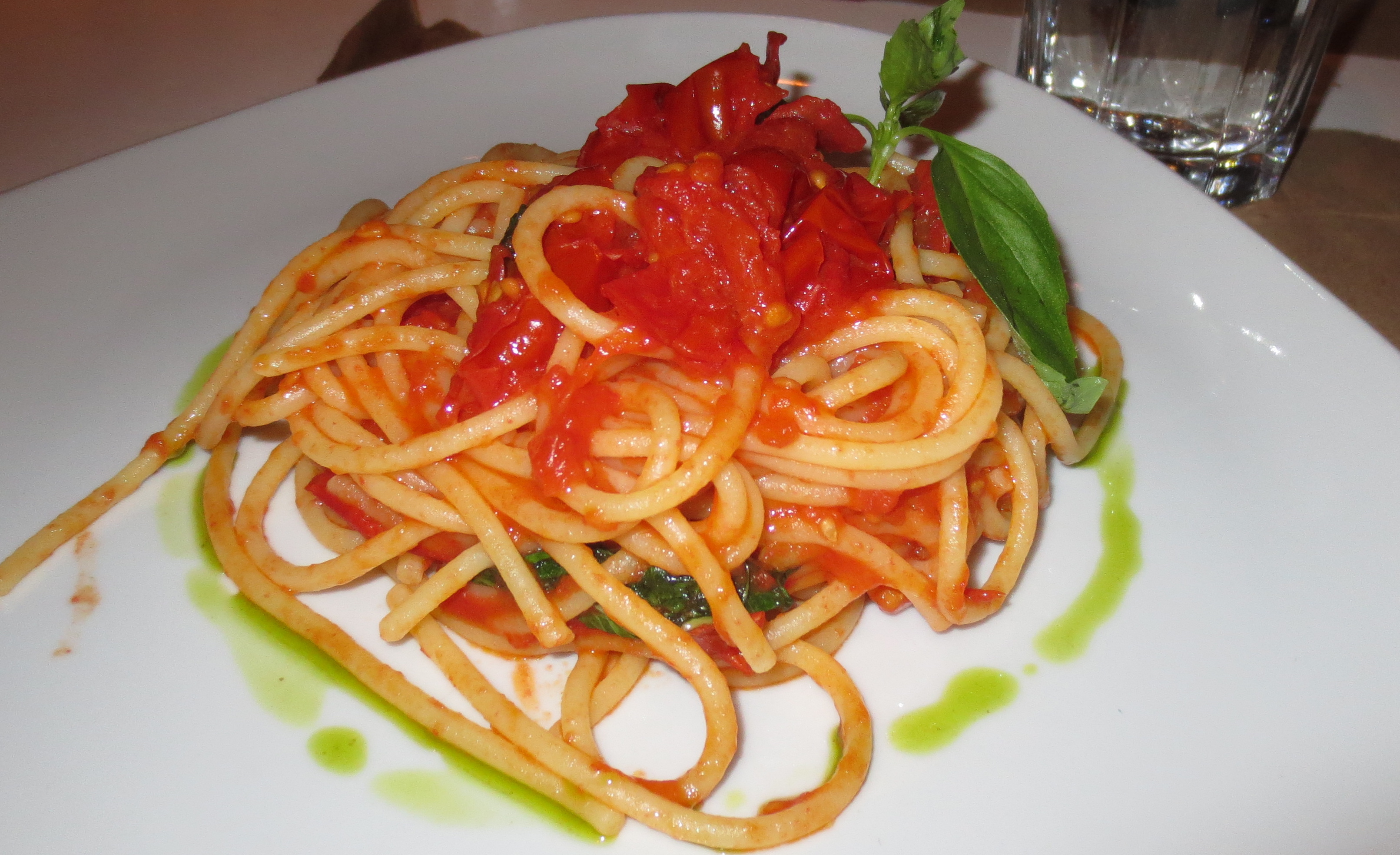 Whenever I go to an Italian restaurant, I usually order Pasta with Tomato Sauce to see if they can pull off this basic, yet very complex, dish. I do a similar thing when I go to Neapolitan pizzerias and order the classic Margherita. Those two dishes are the standards (or at least should be) by which to “judge” an Italian restaurant. A pasta dish can easily be masked in lies with a “touch of cream” and/or some cheese and/or butter and/or “truffle” oil, which usually has zero truffle-anything in it but is nothing more than synthetic. To be fair, when it comes to truffle oil, real truffle oil is quite costly, and while the common ones are not the same as the real ones, it is forgivable to use them once in a while.

My father loves to do the Pasta and Tomato sauce test too when eating at Italian restaurants and even “Italian” restaurants. My mother, on the other hand, never did and my wife always scolds me. See, both are from in and around the area where Pasta al Pomodoro is at its finest, in Campania, specifially the Naples/Salerno area. They grew up producing the world’s most coveted tomatoes on their lands, so eating it thousands of miles away would seem silly. My wife, an even bigger pain in the ass, rarely eats anything with tomato sauce in the States, because it ends up being too acidic.

And now…it seems there is a “new” tomato about to hit American plates : Piennolo.

This may be confusing and overhwelming for Americans who have just recenlty embraced San Marzano and swear they cannot live without it, as a way to cover up an embarrasing past of Wonder bread and junk food and establish a new identity in order to distance themselves from “those” people back home. It’s food! People are starving! What is it with food being trendy? As for San Marzano, most tomatoes labeled “San Marzano” are actually Roma Tomatoes grown in the area of San Marzano. And that’s if you’re lucky you are not eating something from China !!!

This “new” tomato Piennolo comes from the Vesuvius area, known for growing the best fruits and vegtables in the world, thanks to its lava rich, volcanic soil, loaded with minerals, like sulfur and salts and everything else that makes it ideal. The Piennolo variety is actually like a slightly larger cherry tomato, that is slighlty longer. This somewhat pear-shaped variety can have ridges on the sides and the trademark little “nipple” on the end. They have a thick skin, that almost cracks and is almost crunchy. The “meat” of the tomato is very thick and almost attached to the skin. Piennolo tomatoes are adored for their low acidity and sweetness. 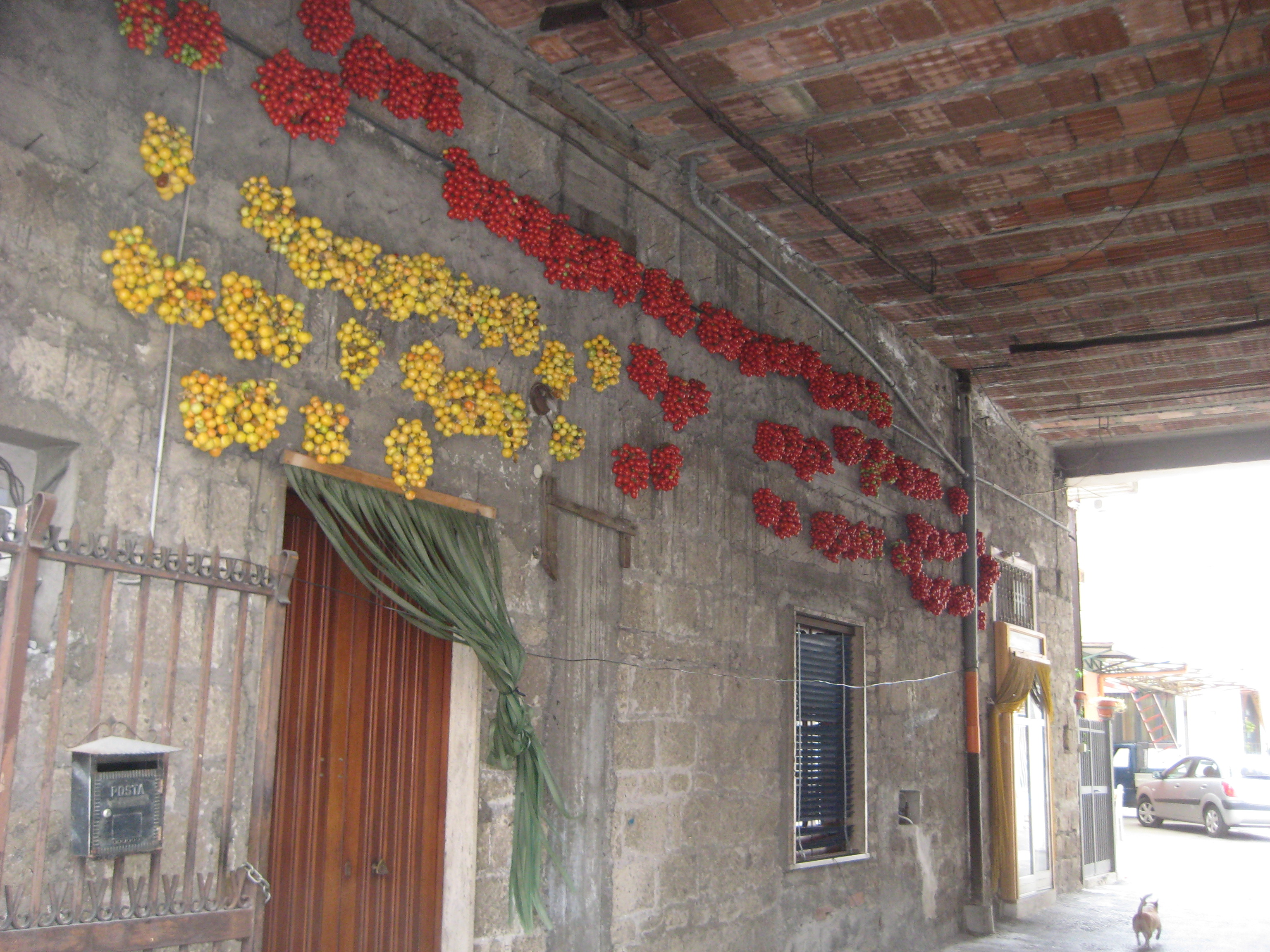 The tomatoes grow in clusters and the name “Piennolo” is the dialect of “pendolo”, which means pendulum in Italian. The tomato clusters are then tied with other tomato clusters and hung. This “hanging bunch” is what Neapolitans refer to as “Piennolo”, though other local names can be used. This large bunch of tomato clusters is then hung outside on the walls of people’s homes, alongside other clusters. The thick skin and low water content allow these Piennolo tomatoes to be preserved without refrigeration in different types of temperatues.

As I mentioned before, the hardest thing to do or “pull off” is a simple dish of Spaghetti with Tomato Sauce. Spaghetti with Garlic and Oil is also hard, but that’s another story. With either dish, almost 100% of places fail miserably. There was hope a few years back when a restaurant named Scarpetta opened up and made their signature dish “Pasta al Pomodoro”. I knew immediately, without ever trying it, that there was no way it would be just that : Pasta and Tomato sauce. I knew there would be butter and cheese, which obviously would taste great, but that no longer makes it Pasta al Pomodoro. I don’t even blame Scott Conant, the original chef, who I admire. Had he made pasta with just tomato sauce, Americans, and yes even those ex-Wonder bread eaters turned “foodies” ( a word I CANNOT stand) would never like it. It’s like being with a dumb whore; you almost HAVE to lie to them. But what if you met a nice girl with brains and beauty?

This brings us to Ribalta, a Neapolitan Pizzeria that not only has great pizzas but also a limited menu with other items, boasting their latest addition, New York’s only Spaghetti al Pomodoro. The “only” part is not my word, but Ribalta’s. Knowing Rosario Procino, from ex-Keste fame, and getting to know Chef Pasquale Cozzolino, I knew that at the very least, the Spaghetti al Pomodoro would be very good.

I ordered it. It came out. I ate it. Can I tell you the truth? Besides my cousin Antonio (R.I.P.) making it the way he did 30 years ago, this was the best Pasta with Tomato sauce I have had in a restaurant in America. I say “restaurant” because I could not go against my wife or my mother and what they do at home. And when I mentioned that to Rosario and Pasquale, they totaly agreed about eating it at home made by an Italian. Italians have been flocking to Ribalta to eat it and they agree too. Heck, even MY WIFE loved it. In fact, Ribata is more a pizzeria than a restaurant, but in the first 3 weeks, they have been pumping out about 50 of these a day! Not bad for a place that makes pizza !

I explained to my other dinner mate, who is American but loves to always learn about the way things are supposed to be, that the very dish we were eating at Ribalta is actually the way it is supposed to taste. Those are the exact flavors I grew up with and try so hard to explain to people with nothing to physically show them and taste. Until now. He was blown away with the taste until I told him that was normal in Italy. Then, he asked my wife how he can replicate it at home. My wife, being Italian, also mentioned how it is weird for her to not only eat Pasta out a restaurant but even pay for it, since she can make it at home. Which leads me to ……

The price. Ribalta’s Spaghettoni al Pomodoro is $ 22. I saw that before I ordered and must say I thought it was high, but I knew what they were trying to do. First off all, as a dish, with those flavors, it is worth $22. Second, to finally have those hard to find flavors so accessible, it’s worth even more. Third, I remembered Grey Goose coming out in the 90’s and pricing itself way above other vodkas, because it was meant to be viewed as “on another level” and “superior”. It was, and the pricing worked to have the consumer mentally envision the sophistication of the vodka. The same goes for this dish. Fourth, in Economics, there are certain things to understand. A product is worth what people are willing to pay for it. Another important thing to consider in Economics, and in Life, is that to always ask yourself a) compared to what? b) at what cost? and c) what hard eveidence do you really have? (btw, Thank You, Thomas Sowell). Comparing Ribalta’s Pasta al Pomodoro to other places that are not that good and yet charge $17, for a mere $ 5 more, you understand even better why $22 is the right price. It’s the Grey Goose of Pasta al Pomodoro in the States. And lastly, the tomatoes they use are from Casa Barone (in glass jars for better taste) are about 3.5 times more expensive than regular tomatoes in metallic cans. You pay for quality.

Quality in Italian means less is more. My cousin Antonio used to say that, in a way, the American chef has to be more talented than the Italian one, since the Italian one has better ingredients and has to do less to make it delicious. That, plus the fact that Americans love “bigger” and “more” of everything, the Spaghetti al Pomodoro is too simple and too hard to do. I always hate recommending restaurants because each one has a bad night and you never know when the chef and owners will be there to either cook or at least monitor. But I can at least say what I said ealier in this article, “besides my cousin Antonio (R.I.P.) making it the way he did 30 years ago, this was the best Pasta with tomato sauce I have had in a restaurant in America. ”

Important Side Note : The pasta used are Spaghettoni, which are thicker than normal Spaghetti. They are almost like Bucatini without the inside hole.