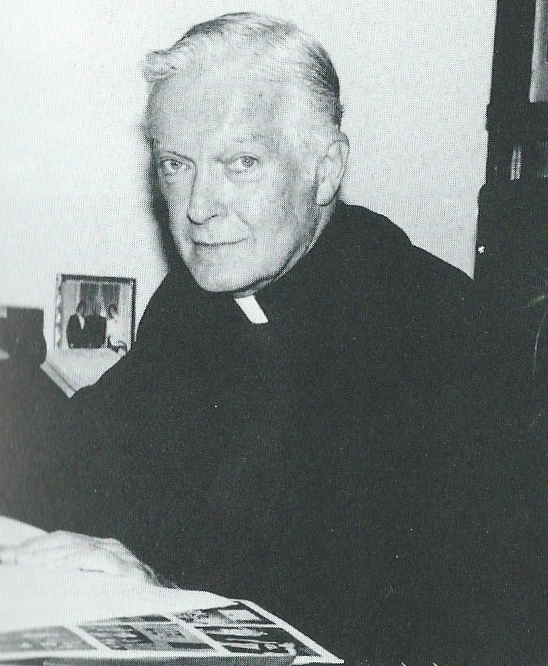 When one person is able to change at least one thing for someone else and remain with that other person long after they part ways or, in some cases, leave this Earth, it is a remarkable accomplishement. When someone is able to do that to a couple or more people, it is amazing. Play a huge and memorable role in thousands of people’s lives…well that’s just …… I cannot think of the word. Let’s cut to the chase; that’s Fr. Prior.

In a school where students and faculty members come and go, Fr. Prior was the beating heart and warm embrace of 980 Park Avenue for over half a century. Though he had many roles at Loyola, his longest and most memorable was Assistant Headmaster. Like it or not (and let’s be honest, everyone loved it) he intimately connected with each student. How could you miss him? Before classes, during classes, and after the last period, he would always be found standing outside his office by the stairs, greeting the students with a kind message, a word of encouragement, and of course, in my case, a reminder to serve JUG.

It would be impossible to remember how many JUGS I served, and how many I skipped, but I would bet 9 out of 10 JUGS were given to me by Fr. Prior. I was a troublemaker. No question. But the real question is how could Fr. Prior have been there every time I cursed, or broke something, or who knows what else? I swear, at one point, I believed he had some magic powers or perhaps there were two of him to be in the cafeteria one second and the next second in the gym, and the next in a bathroom on the upper floors to check up on his students, his children, his sheep. He was the Good Shepard. He never let one slip. I once was smoking a cigarette and cursing a few blocks away from Loyola and I turn around and there he was….like a Jesuit Batman ! Never once did I get mad at him for giving me JUG. Sure, I hated JUG, but when it came from him, I knew he was trying to help me. I am not the only one who felt that way.

We all have Fr. Prior stories. All Loyola students share similar ones, like forcing certain boys to shave with some 1950’s electric razor he had in a box if they had more than stubble showing. But one personal story touched me so deeply, I would and could never forget. He called me into his office, and I automatically started going off, shouting, “Father, I did not do ANYTHING! Father, what did I do? Who said what? I didn’t do anything. It has to be a lie. I am serious; I am innocent!” He sat there, calm with a slight smile. He let me finish my crazy rant and then looked deeply into my eyes and asked, “How are you?” I was shocked and confused. “Fine. Why? Father, I didn’t do anything.” Then Fr. Prior went into asking how things are going at home, outside the school, in Life etc. And then it hit me. He just wanted to catch up and see how things were going and if I was ok. THAT’S who Fr. Prior was, a geniune friend.

He had a glowing aura about him and mixed his kindness with jokes. When we would sit in the bleachers during the morning announcements, he would take out his clipboard and check off names to see who was present. But on the other side of this clipboard, facing us, the students, it read in big, elegant Script letters, “Smile. God loves You.” I’ll never forget that message. I could never even forget his beautiful penmanship! Of course, he had a funny side. On his desk in his office, he had a paddle to spank bad children that said “Attitude Adjuster.” He would never use it; it was just his great sense of humor. We all knew he would never use it, but with his soft manner and a little joke, it reminded you who was in charge. “Speak softly and carry a big stick”. But his stick was his normal hug and laugh.

Even the teachers were his children. They melted in his hands.

I always stopped by after graduation, just to chat. I not ony longed for his voice, his laugh, and his comfort, but wanted to know how he was doing. He was moving up in years and I knew eventually he would leave us to check on the Angels and who was doing their job. I always made sure to bring him a Christmas gift every December and my mother would make sure to remind me repeatedly until I assured her I did.

For his 80th Birthday, Loyola reached out to the community of loyal sheep. Over 1,000 people showed up. It was a beautiful time. We all felt like children again, under the supervision of Fr. Prior. He was a rock star that night, but then again, he always was. Even after the hurt and depression that followed September 11, he was there to welcome back Alumni, who made it a point to make that Alumni Night one of the most attended. Those feelings of Love, Companionship, and Solidarity were all brought together into his world. I remember noting, while still in High School, that when the day came for Fr. Prior to leave us, they would probably have to do the funeral in Central Park. Where else could they fit all those people coming to pay their respects?

I clearly remember getting that terrible text in 2007. I got it and froze up. I knew that day would come, but still. I sat there, not moving, for 5 minutes.

The funeral was held in the Loyola Gym. The same gym where Father Prior would tell us to take our dress shoes or boots off when playing basketball or soccer. The same gym he walked around with that clipboard that said, “Smile. God Loves You.”

I feel bad for the new students who don’t have Fr. Prior as an active and intimate part of their lives. I even feel bad for those students who had him around but not as Assistant Headmatser. I remember Fr. Prior telling me his one complaint, after stepping down as Assitant Headmaster and becoming Vice President of Alumni Relations and External Affairs, was that he lost that non-stop contact with the students.

Many Alumni went out of their ways to have Fr. Prior marry them in St. Ignatius Church. It was that bond that could never be broken.

Father Prior was…no, IS loyola. Loyola IS Fr. Prior. As much as I miss my youth, my friends, and some really fantastic teachers, I miss Fr. Prior even more. He was the spirtual glue among us that never lost its grip. I still remember his walk, the way he would waddle on the outside of his feet. I still remember his shoes, his watch, and his hair.

We all go through tough times, and I must admit, I am going through a hellish period as of this writing. I pray for help and guidance. Sometimes, I think of Fr. Prior’s comforting, reassuring, and probably most used phrase that took him a few seconds to get out, ” Ahhh…..OK.” I am not alone when I say Fr. Prior made us feel better than OK. We still miss you. Ex Fide Fortis.

2 thoughts on “Remembering Fr. Prior”