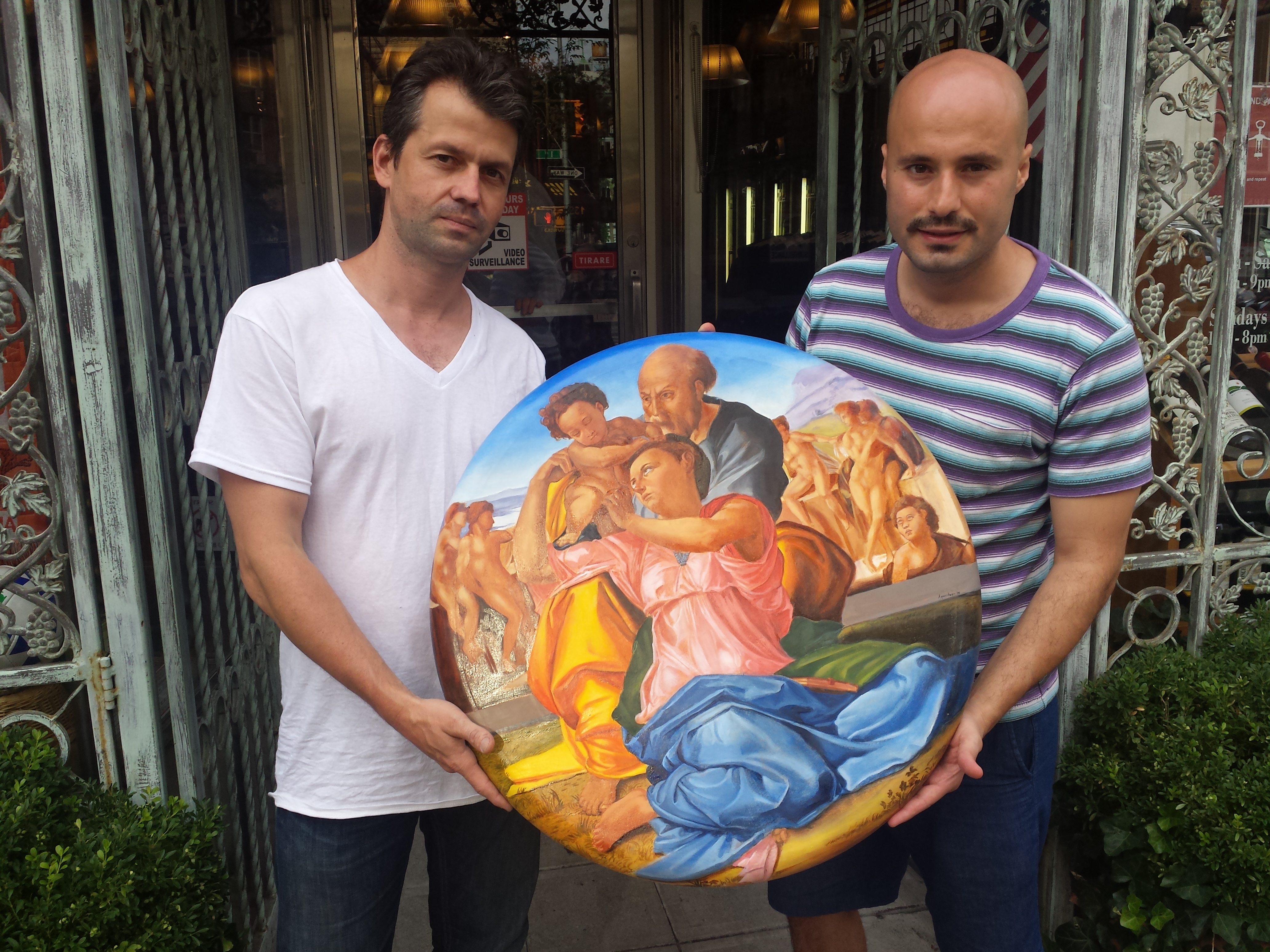 Life is bizarre and full of pain. Sometimes you get what you always dreamed of, probably because you have envisioned it for years and have played it over and over in your head. I wanted a wife from Italy, believing the best come from Naples and also Salerno. Would you believe I found one that is born and raised EXACTLY IN BETWEEN BOTH Napoli and Salerno??? There are so many other things that I had to wait long and hard for, and some I have yet to get…and may never get.

Michelangelo’s Doni Tondo is a painting which has haunted me my whole Life. When I finally got to Florence in the late 90’s, I was able to see it in person at the famous Uffizi. The Renaissance is one of my go-to periods when I dream of a perfect environment and perfect period in which I wish to have lived. One of the main reasons for this desire is….the COLORS. The colors of Michelangelo’s Doni Tondo are textbook Renaissance and they make me feel happy. It’s that simple. There are many color “versions” I found online, but I wanted to replicate the Doni Tondo to perfection and the colors had to be exact too.

That’s why I had Alex Gardega replicate Michelangelo’s Doni Tondo.

I have commissioned him to do other work for me in the past but I always hesitated on the Doni Tondo. Sometimes I get so excited and anxious, it stops me from chasing my dreams. My wedding was coming up and Gardega offered to replicate the Tondo of the Doni family as a wedding gift. It was an offer I couldn’t refuse.

The Doni family commissioned Michelangelo to do a painting of the Holy Family. Tondo in Italian means round. Hence the name “Doni Tondo”. As much as it haunted me, working on it also haunted Gardega. He actually did it twice, wiping clean the canvas to make it perfect the second time around. He wanted to get this one right and pay the most respect to one of his favorite artists. Gardega is obsessed with the Geometry of the classic paintings and in the Doni Tondo, math is central. Mary occupies the center, being the main focus, as she plays such a huge role in the Catholic Church. The Baby Jesus and Joseph complete the triangle. Maybe a “Trinity” of images? This “triangle” conveys a very intimate interaction that symbolizes the Holy Family. Back when artists were REAL artists, EVERYthing was done intentionally and intellectually. Look at the direction of Mary’s eyes. She is looking up to Jesus, who is just a Baby.

The image in the middle right is a young John the Baptist, Jesus’ cousin of around the same age. John is admiring and adoring the Holy Family and is, some assume, standing in a Baptismal Pool, with the naked bodies behind him, possibly representing pagans who will be purified through Baptism. As in the Bible, John is the figure who brings the people to the Light. This is PURE and brilliant art making here, my friends.
Look at the folds in the clothing. I don’t even now if “provocative” would be the right word.

The frame is wood-gilt. Michelangelo designed it but I believe he did not carve it. Obviously, there’s pretty much NO one who can do that frame nowadays, but that’s ok because I prefer many of my paintings to be frameless, especially round ones. I have another round one Gardega did for me…but that story is for later.

Alex Gardega is an amazing artist who has done incredible work with glass, canvas, and now is branching off into sculpting. It is no wonder that he was always obsessed with Renaissance artists like Michelangelo, Da Vinci, and Raphael.

Oh….and by the way, Michelangelo’s Doni Tondo is believed to be one of the main precursors to his work on the ceiling of the Sistine Chapel. Oh, by the way, when my father opened a restaurant in 1984, he called it Sistina.

Speaking of restaurants, I asked Gardega, that while I knew it was a wedding gift, if I could give him something…anything… for his masterpiece. He said either to get him a brush or a dinner at an Italian restaurant. What do you think I chose?

I have always wanted to go to Felidia, a restaurant owned by Lidia Bastianich, a famous TV chef. Felidia is elegant and was just right for our Italian dinner. The chef at the restaurant is Fortunato Nicotra who used to be a customer at my wine store. Fortunato also worked with one of the best chefs in the world, Ciccio Sultano. I had the honor of having Ciccio cook us a private dinner in Sicily in 2003, when I went to visit my friend’s winery, Gulfi. It was one of the most memorable and moving experiences in my Life. Gulfi changed me. The Ciccio dinner moved me. The scenery was so shockingly beautiful, that I told Gulfi owner Matteo Catania if I were to ever win the lottery, I would buy his estate. 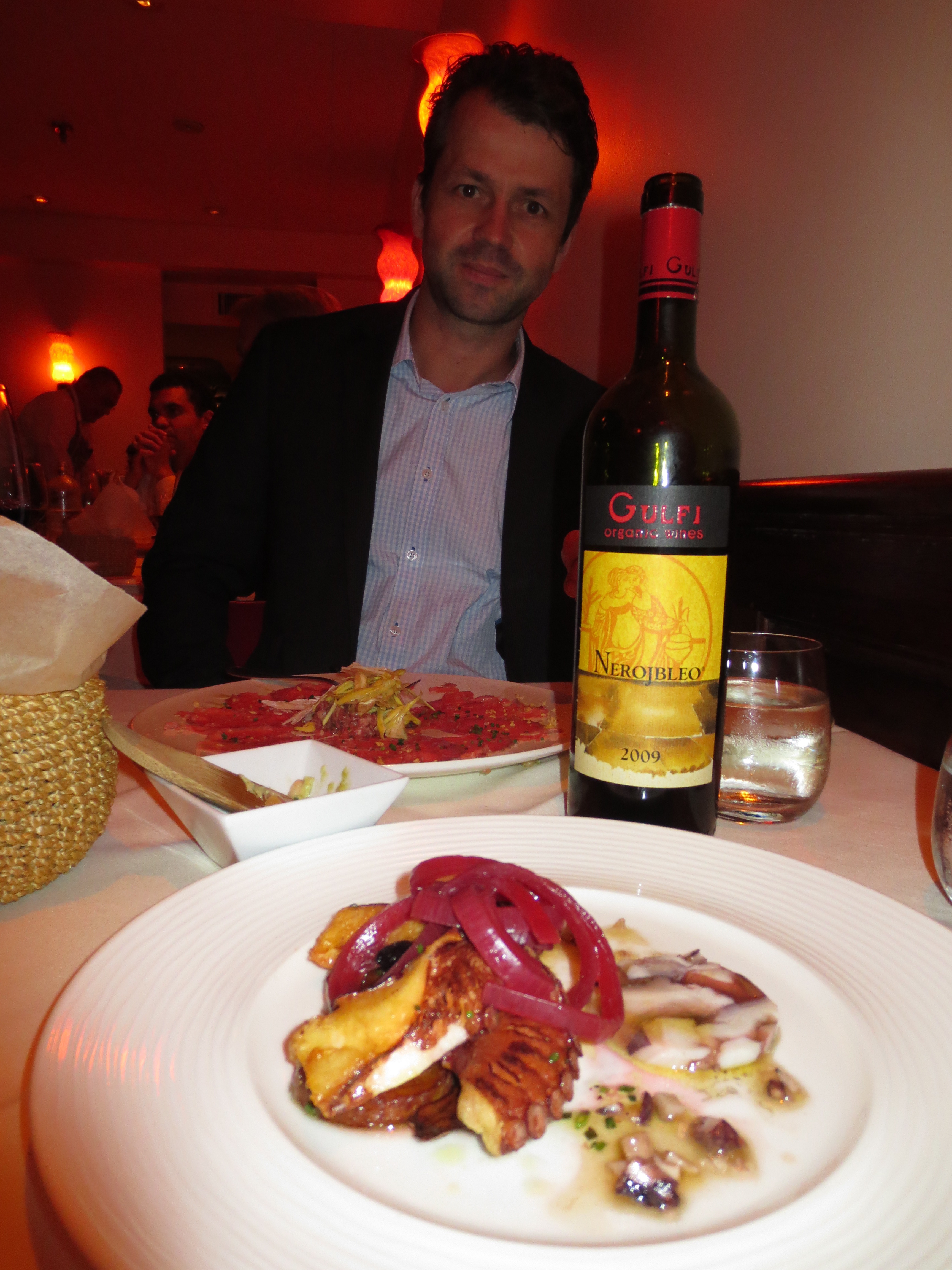 I have been selling Gulfi wines for about 12 years now and have been in love with, not just the winery but, the image they use on their labels. Nearby Gulfi is Piazza Armerina, a town in Sicily which proudly promotes its Villa Romana del Casale, a UNESCO World Heritage site that has the richest and most complex collection of Roman Mosaics in the world. Of the many Mosaics at the Villa, Gulfi chose to use for their labels the “Erotic Scene” which is of Eros and Psyche. The story behind this Mosaic is of Eros (Love) and Psyche (Beauty) who have to hide their love in the dark from Venus’ envy. From this passion, it gives rise to Voluptuousness (Pleasure). For the winery, this is a metaphor where Eros is Gulfi and the love to his wonderful land (Psyche) gives rise to the wines that are pure expression of Pleasure (Voluptuousness).

Like Michelangelo’s Doni Tondo, I had been obsessed with this Mosaic that Gulfi used for its labels. So naturally, I had Gardega replicate it for me in 2010. The Gulfi/Villa Romana Mosaic Painting hangs above my living room couch, while the Doni Tondo hangs above my bed. 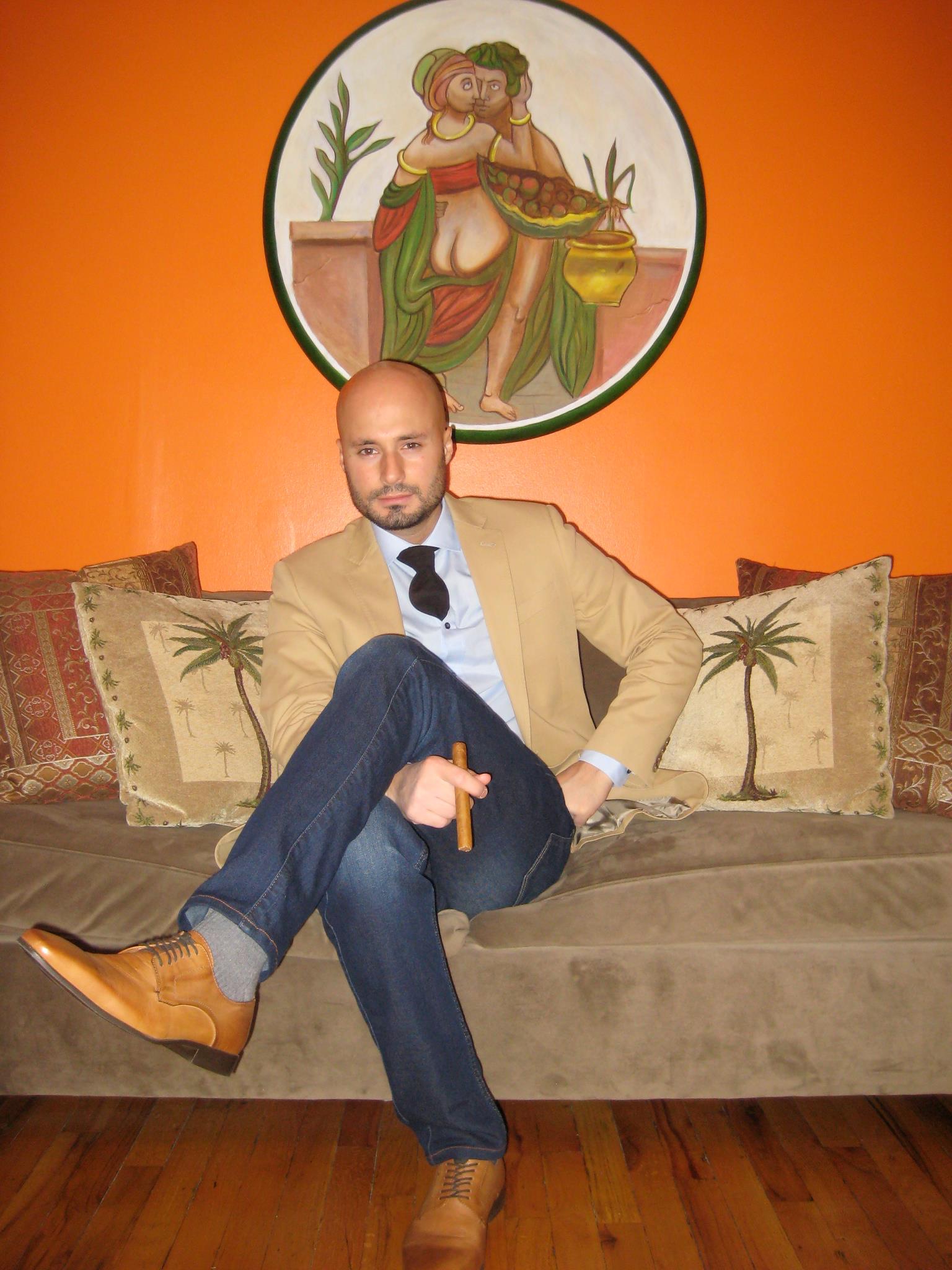 So which wine did I chose at Felidia? Gulfi’s Neroibleo 2009, of course ! It is a fabulous Nero D’Avola that I sell at my wine store for about $ 20. It is a steal.

The food at Lidia Bastianich’s Felidia was exceptional too. We started with a Carpaccio for Alex and an Octopus for me. Both were exceptional. For the pastas, I HAD to have the Bavette with Pesto Trapanese and Calamari. Since Chef Fortunato Nicotra is originally Sicilian, this dish promised to be great. It was. The Trapense pesto was perfectly assembled with the perfect texture and combination of Almonds, Basil, Tomato, Oil, Garlic, and Pecorino. Alex went for the Candele with ‘Nduja and Ricotta. Being a Texan, he had to go for the spicy Calabrian sausage spread with the candle shaped pasta. He was amazed at how well al dente it was cooked. 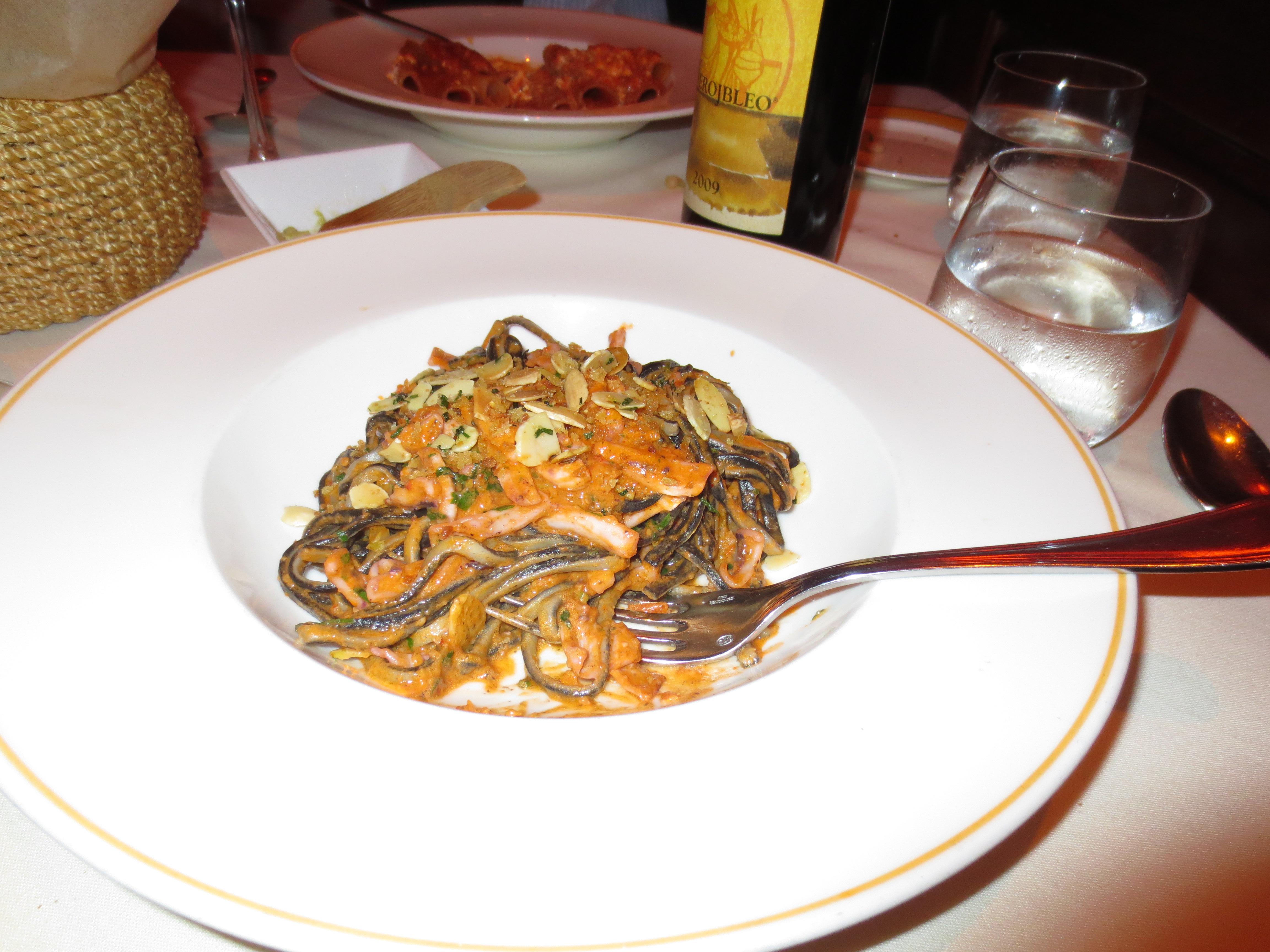 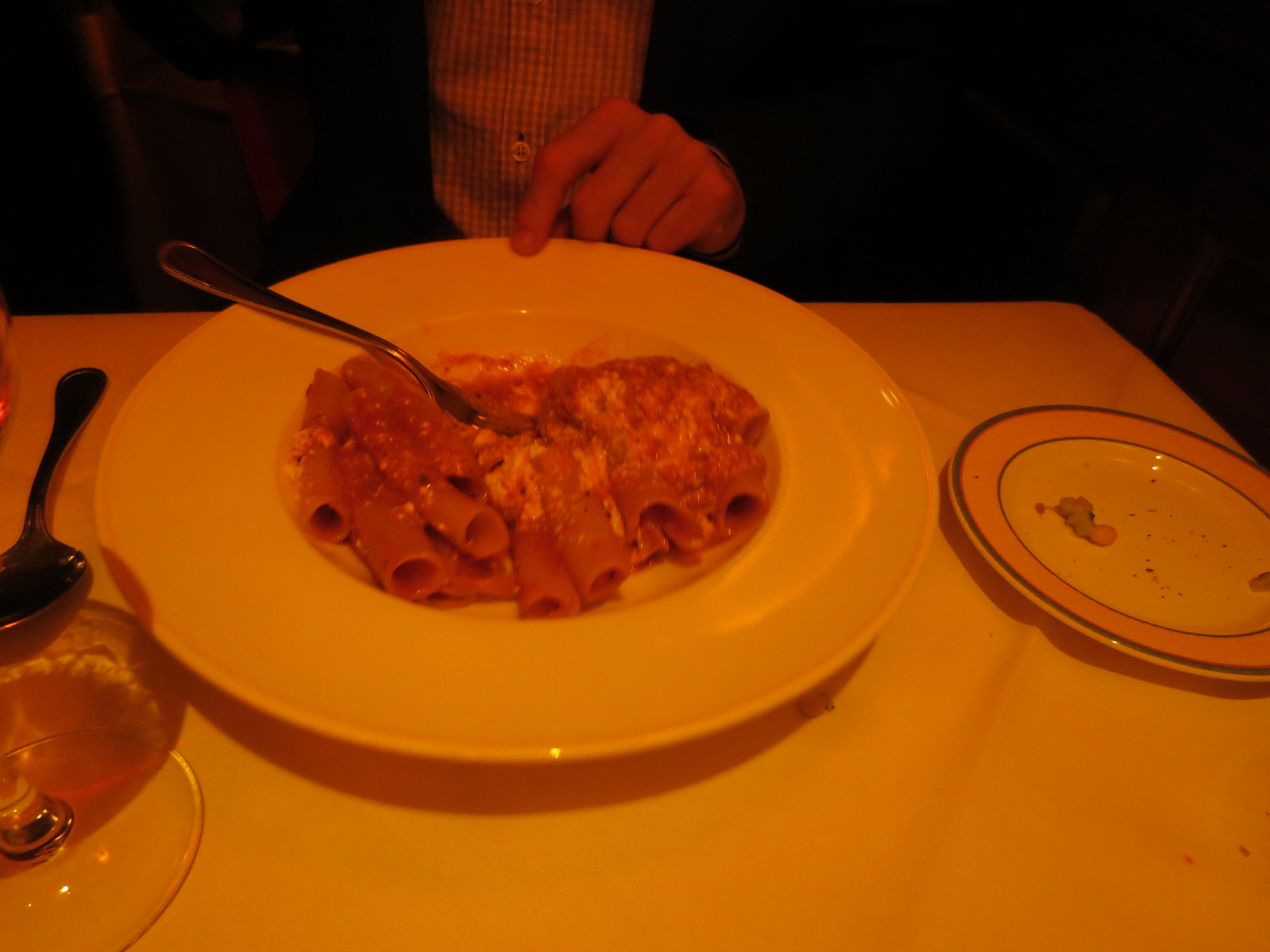 We decided to skip on dessert but the staff, who we chatted with over the course of the dinner, offered us Tiramisu and an assortment of cookies. The whole evening and purpose of the evening were a mix of coincidences. As the waiter poured the wine, he mentioned how much he loved it. I told him I sold it and he enthusiastically misunderstood that I distribute it, instead of me buying it from the distributors. The Wine Director Jenni came over and asked if I worked for Selected Estates, the fabulous wine company responsible for importing some of the best Italian wines to the United States for over the last 30 years. I informed her that I am friends with the owner and some of the sales people but that I buy from them to sell to customers at the retail level. Talking further, I discovered that she too spent time at Gulfi, and even lived in Sicily. Like my experience, hers was also transforming. There were just too many coincidences to list!

Oh by the way, my brother went to school with Lidia Bastianich’s daughter, who ALSO was an ART major, who would have loved Gardega’s spot-on copy of Michelangelo’s Doni Tondo. Talk about coincidences !!

And even more bizarre is that my cousin works at Felidia, though he was not there that night. I had been told of that before but completely forgot when I was there.

Some things were just meant to happen. Good food, good wine, and good art seem to find each other when good people are involved.

4 thoughts on “My Doni Tondo, Dinner at Felidia, And Tons of Coincidences”