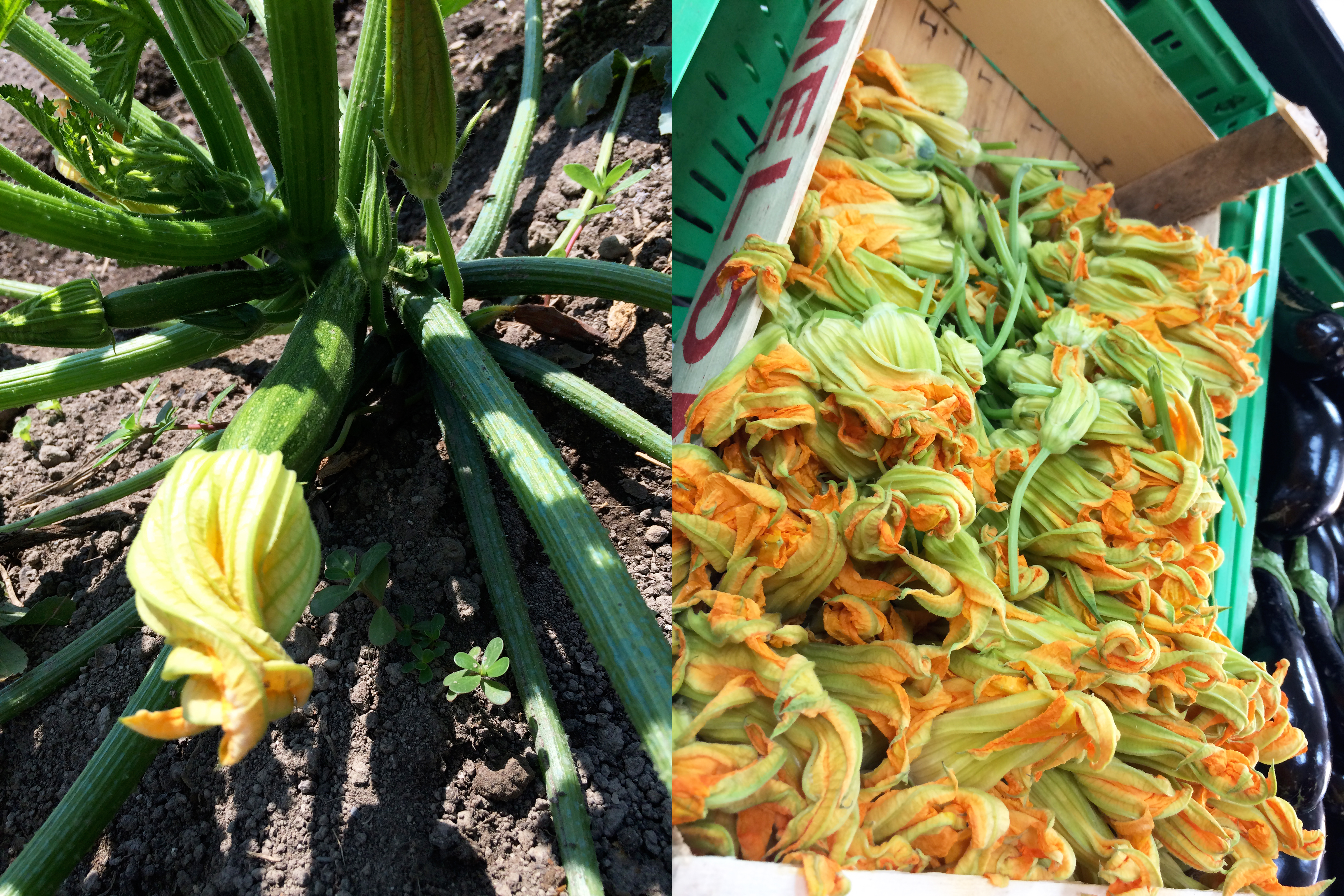 Growing up, I spent almost every summer in Italy, around Salerno. Those times produced experiences I will never forget and so many of those live on as strong memories, most having to do with food. One of the foods I look forward to the most before boarding the plane and miss the most while back in the States is Zucchine Flowers. In Italian, we call them Fiori di Zucca, and in Neapolitan Dialect “Sciurilli”.

They are the flowers of the Zucchine. They are edibile. They are DELICIOUS. Italians, especially those from Campania, love to use them in the famous ciambotta, a stew of any vegetables, but one of the most famous being with potatoes, carrots and zucchine flowers. Since Neapolitans LOVE fried foods, they love to stuff them into zeppole, which in Italy are not the sweet ones we find in the States, but salty. They are also great fried on their own. If you want to cry tears of joy, stuff them and fry them. Stuffing choices can be cheese (always popular), cheese and anchovies, potato puree, or even baccala’ (cod fish). They don’t have to be deep fried; pan fied are great, too.

My FAVORITE way of eating them is on pizza. LOADED on pizza. I do not like too much toppings on pizza, but zucchine flowers are so delicate and light, they need to be thrown by the handfuls on pizza. For some odd reason, outside of not just Campania, but even my area around Salerno, pizzerias use it sparingly. I can unequivocally say the best pizzas I have ever had in my Life are the ones made by my Zia Dolores. And I am not the only person to say that.

I have no idea why lately there has been an EXPLOSION of Zucchine flowers on every link or photo I see on the internet. I pray it won’t get ruined like Kale. But then again, it is so costly, maybe the ones who appreciate them can keep it for ourselves. In 2002, I remember buying at a Farmers’ Market a box of 20 flowers that cost $ 5, a cost of 25 cents EACH !!! To give you an idea how absurd that is, 20 flowers probably gives you about 2 tablespoons when they are cooked. Granted, you can stuff them and the stuffing adds weight to it, making each flower or two a sufficent appetizer, but you get the point.

Recently I saw my friend and super star TV Chef Nick Stellino cooking them. they looked delicious. He is someone who SHOULD be cooking them since he appreciates the beauties of Life. He was planning on stuffing them with Ricotta and frying them. Oh, how I wish I were there with him to eat them! We could eat them while we discuss proper shoulder structure on a suit jacket.

SIDE NOTE: I write ZucchinE with an “e” and not “i” becuase a zucchina (singluar of Zucchine) is the smaller Zucca. Since it ends in “a,” the plural would have to end in “e”. Though, some Italians do end it with an “i”, most likely this wrong way of writing it came form the American misunderstanding and mispronouncing of Italian e’s as i’s , the same way they incorrectly say LinguinI, instead of the correct LinguinE.