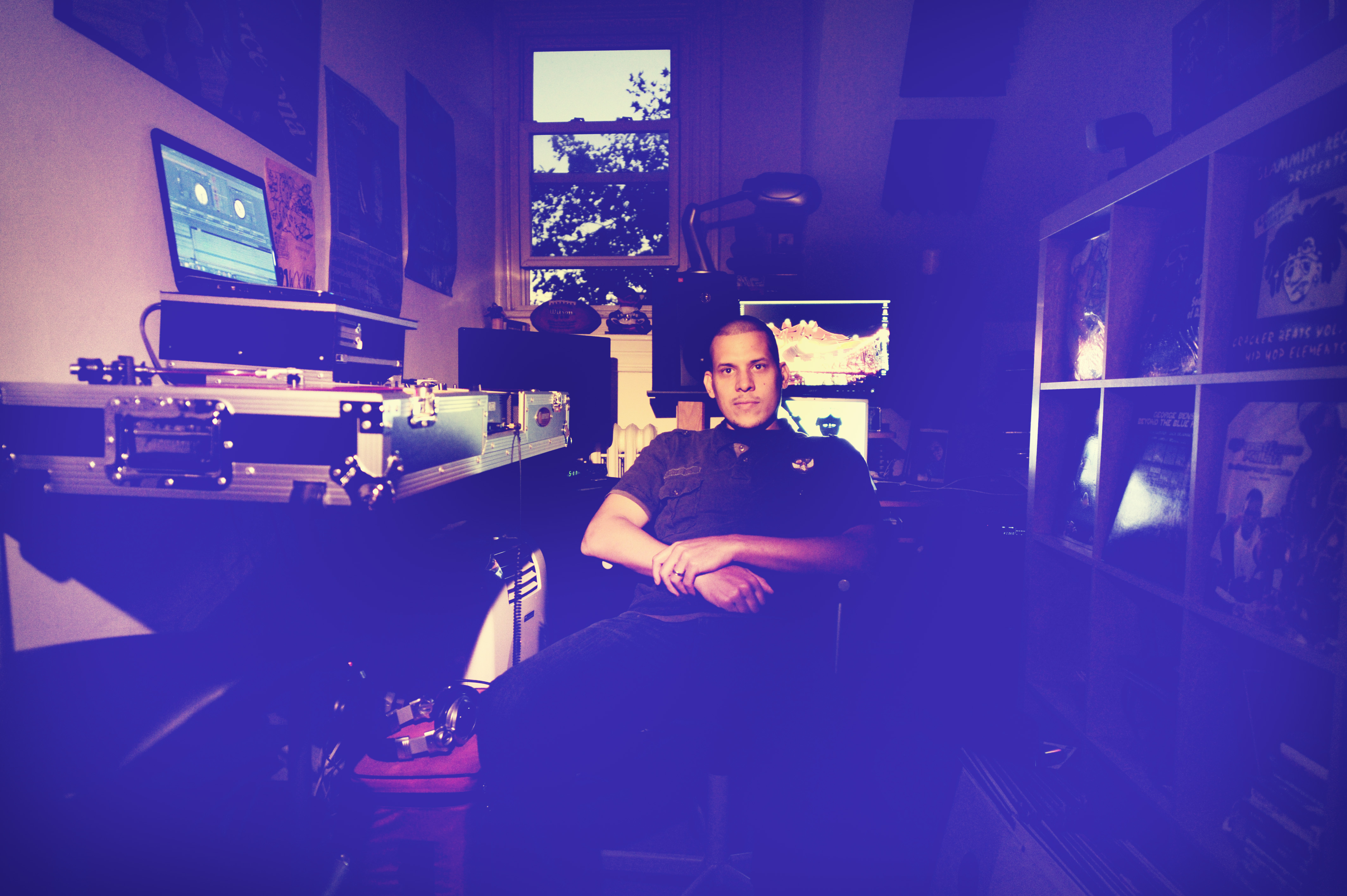 It’s crazy to think you can get to a certain age and have known someone for decades. It’s even crazier when that person has been doing the same thing for that whole time. Joe Lopez has been involved with music since childhood, giving strength to the saying “stick to what you know best”. It has been the one constant theme in his life and those that know Bazooka Joe, know it will most likely be that way for the rest of his days.

Bazooka Joe teamed up with my brother, who went by the name Mr. Furley, and Phil (then Smooth Z, now known as DJ Phlirt) to bring to Villanova Univeristy its first serious Hip Hop Show, called “Hip Hop Theatre”. Besides the big names like Stretch and Bobb or Martin Moore and Mayhem, the Philadelphia based “Hip Hop Theatre” caused quite an impact for being outside of New York. Growing up with the real Hip Hop essence as it started and grew in New York, it was always a thrill when my brother would pass me off a gem tape from one of their shows or extra songs they would get. It added to the stuff I was already getting from the New York stations. And somewhere along, DJ Bazooka Joe even occasionally would drop a verse or two !

With the connections made there, Joe also had guest spots on Bahamadia’s radio show. After getting gigs Dj’ing around New York and Philly, Bazooka Joe released his own mix-tapes called “Truck Jewls”. The tapes were huge underground sensations and helped solidify Joe’s name in the industry. Those who were down then all remember those tapes.

To add depth to his credentials, he spent years fusing Bollywood with American pop beats at SAAVN, while also doing work with Louis Vuitton, providing them background vibes for various events. On the charitable side, he also has dj’d for Rush Philanthropic, Russell Simmon’s Art Foundation.

Remember Black Sheep? They have been making a comeback, and Joe helped out in a big way by dj’ing their tours, taking him around the world. Currently, he runs his own company “SounDecisions”, which specializes in event DJ’ing and digital content management. It also allows him to do what he loves most, working with the hungriest up-and-coming rap artists.

Years ago, around 2000, I mostly gave up on rap, but it is always refreshing to see people like Bazooka Joe still fighting against the winds of bad Hip Hop Music. Piazza Life enjoyed picking out of Joe’s dusty crates of music and ideas.

1) There is NO way to count how many songs you have owned in your life, but if you had to, how many would they be? And if a random one popped up, would you remember it if you heard it?

Well first of all, thank you for taking the time to show interest in me and what I do. We go way back. It’s good to see you active in so many interesting & positive things; I love the site. As for the music, I have roughly 50,000 tracks in my itunes library over 50 full crates of vinyl and counting. I can’t say I would remember everything I’ve ever heard but anything that was good and stuck in the brain, I usually can tell you where and when I was the first time I heard it, who produced it, and probably some other quirky, irrelevant piece of trivia attached to the song…my brain is like pandora.

2) What’s the first thing you automatically think of when you hear a song? As a producer/dj, I am sure you immediately scrutinize the beat?

Yes, the beat first and foremost. If I don’t like the first 4-8 bars of a beat, I will hit skip before even listening to the lyrics. The beat has to have a certain vibe and feel to it to lure me in, no matter what genre, but especially with hip-hop. That’s personal listening though. As a working DJ, I have to be more open to playing songs I don’t like sometimes and understand why people like them. I’m sure you’ve sold a bottle of wine in your day that you would never drink.

3) What’s one piece/tool/instrument you can’t live without?

A radio, turntable, boombox, anything that plays music. I’m always listening to something whether cooking at home, riding somewhere in the car with my kids, working on a song, or DJing a party, music is always there. I don’t read books or watch a lot of TV; music is my thing.

4) How has fatherhood changed you?

It was a big change for someone who never had to think about or for other people, and it put many things in my life in a proper perspective. I’m more or less the same person I’ve always been, just the ultimate goals have changed drastically. I’m not only a dad, but a ‘stay at home’ dad, so I put in full-time work that a lot of other dads have told me they could never do. I can hold my own in the kitchen now, which is something I couldn’t do before having kids, that’s for sure. Family is important. My family structure growing up was very different than most people, so having my wife and kids there everyday has also helped rebuild my sense of family after losing my mother in 2001.

I’m most definitely the least religious guy you might ever meet, but I have felt connections with the “spiritual world”, if you will, at times in my life, and I do believe in Karma and positive/negative energy. I hope there is something at the end of it all, especially for those who live life the right way, but I would not be surprised if there isn’t either. Being a Libra I’m 50/50 on it I guess.

6) What would be the golden era for you in Hip Hop?

For me it was probably 89-93. Musically, I feel Hip-Hop was at it’s purest form, a lot of creative sampling, the James Brown sound, albums that were almost movies like De La Soul is Dead, Sex Packets, Fear of a Black Planet, The Cactus Album, Paul’s Boutique, evolving towards Nas, Biggie, Wu-Tang and that whole movement sparking the mid 90’s. Artists took so much pride in their albums and there were no founded industry “rules” to making a Hip Hop record. It wasn’t until after 93/94 where the idea of not doing something because “it might not sell” came into the picture a lot more. Basically, once rappers stopped smiling and going on stage with dancers, it became less fun. That’s not to say there wasn’t great music made after then, but the vibe to me was purer before that time…more experimental.

7) If you could live anywhere in the world, where would it be?

It’ a toss up between Amsterdam and a Caribbean Island like St. Lucia or Puerto Rico. My wife and I seriously considered moving to Amsterdam at one point when my son was just born, not for the reasons one might expect but we like the diversity there. The music and art scene was inspiring and the idea of our son growing up in Europe was enticing. We also had Dutch friends to help with the transition and got as far as looking into schools and jobs, but it never materialized.

8) You could only work with one recording artist for the rest of your life: Who would it be?

Slick Rick or Raekwon, either of these 2. I never get tired of hearing them rhyme; even over bad beats, I will make exceptions for these guys.

9) Would you rather wear your underwear over your pants for the rest of your life or never listen to music again? You have to choose?

Give me the underwear. I’ll bring that Hall of Justice/Super Hero vibe to the streets while I’m walking around with my headphones!

10) Who are some of the artists you are currently working with now and which directions are you planning on going with them?

I’m working with another producer named X-Ray right now on a new project/brand that I’m excited about. He is the producer responsible for Monsta Island Czars & Darc Mind and has worked with Public Enemy, Roc Marciano, MF Doom and others. We are older guys and our plan is to bring back the lost art of producing a record by putting the right people in a room and delegating talent. It’s not about us making all the beats, but putting together a solid song that is more than emailing an artist some beats and linking up with them once they have the raps written. We’re taking a more organic approach to making music in the midst of all this technology around us, that’s the direction. I’m also working with a group called Uppanotch from Queens right now who are two very smart dudes in their own right and do not need to be rapping at all, but they have a passion for raw hip hop and street poetry and are also of West Indian descent, so we are trying to craft those elements & influences into a dope new sound for their next album which I am quarterbacking sort of not making all the music.

11) Where do you see dj’ing going in the next 10 years? Because A LOT has changed from having to carry crates of music to now people walking around with an ipod….the world is a different place.

I think Djing is bigger than it’s ever been, which is good and bad. I like the fact that I’m seeing a lot of USB turntables being sold and vinyl still alive and well, but there are people out there that will water it down by being glorified button pushers and having technology with no taste in music or ability to read a crowd. I will say the whole celebrity DJ craze like Paris Hilton and Elijah Wood getting DJ gigs is kind of sickening. On the flipside though, it all comes down to a kid having passion for the music they’re playing and freak the equipment he/she has, and I’ve seen some DJ’s do amazing stuff with the new technology, so it all comes down to the individual at the end of the day and if they can “freak” it, they will get that respect no matter what tools they are using. Any DJ from the 80’s or 90’s would use the same technology if it was available back then; don’t let anyone tell you different.

12) If your kids wanted to get into music, would you encourage them or try to re-direct them elsewhere?

I would encourage my kids to do whatever they wanted to do as long they went it about it the right ways. I don’t want to sound like that old “back in my day” guy but it did take a certain breed of person to want to be a DJ, musician or artist. There was a certain level of personal commitment and money that had to be invested in records, equipment, studio time etc. You couldn’t just buy a DJ setup in a box or download an app for 99c, fade your favorite songs from one to another and call yourself a ‘DJ’. So if my kids wanted to DJ or make music in any way, I would teach them the way I learned without the technology and make sure they understand the value of paying those dues. My son is already a decent guitar player at 10 years old. He plays guitar, upright and electric bass. He can also read sheet music and makes some mean dubstep beats, so if the time comes where he wants to take any of these talents to the next level I will make sure he gets the right teaching whether it’s from me or someone in my network.

3 thoughts on “Interview of the Week : Bazooka Joe Lopez”