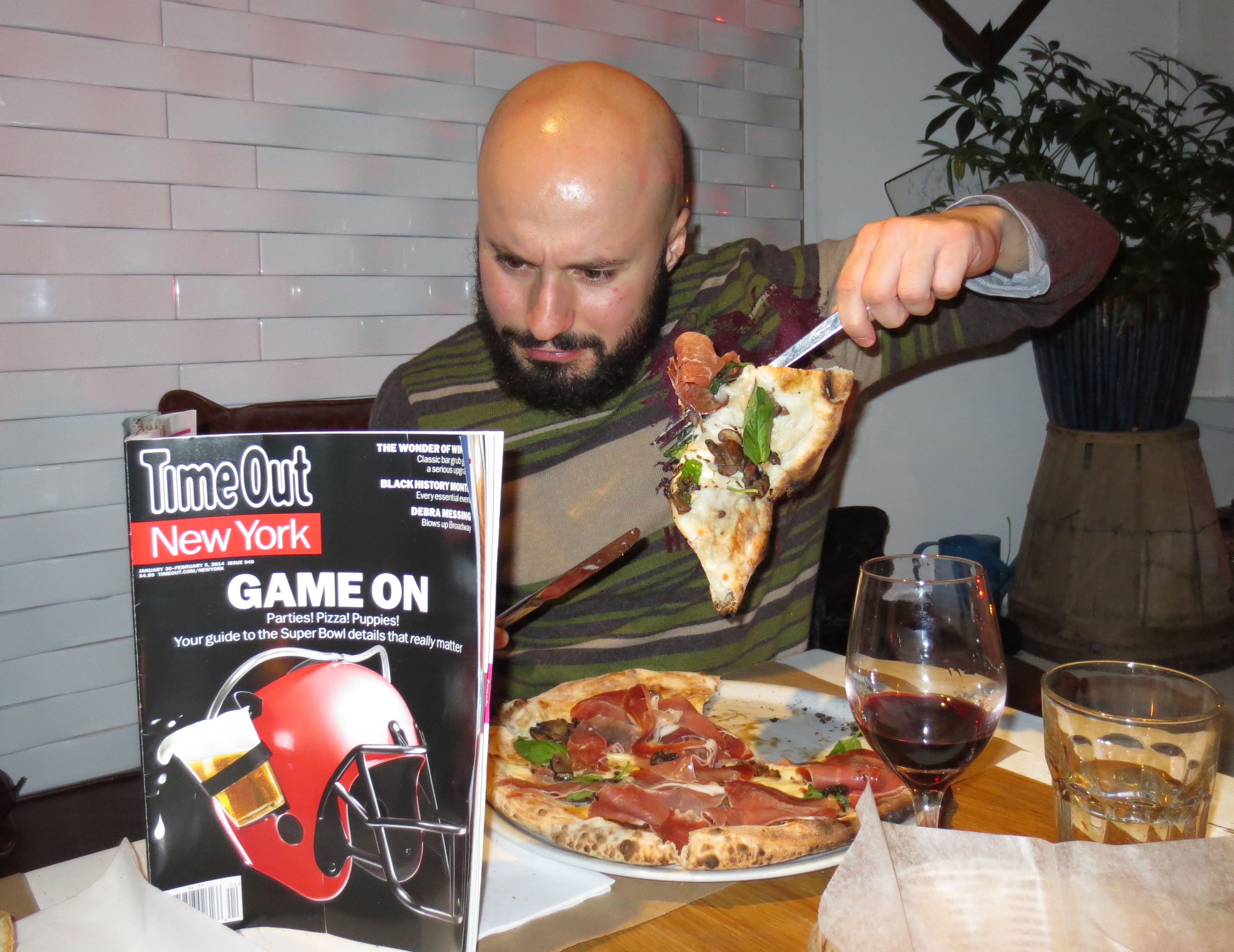 My dear friends, years ago (2007-2008) I found in me the need to inform the world and clarify what there needs to be known about Pizza as it is made in its place of origin. Since I could not just stop there, I included coffee. When I introduced to the world to my website pizzaandcoffee.com , I went into detail about 2 of the most important things we eat/drink, but sadly know so little about, and, at that time, of which were so hard to find well made versions. Stories of couples finally being able to conceive, relationships healed, wars ended, were all direct results of pizzaandcoffee.com ‘s impact. Here are just a few predictions I made at the time and which all came true.

1) I would have been wildly misunderstood.
After reading the site, one would think that the only pizza I think is “good” are the ones made in Naples in the “Neapolitan” way. This is not true at all. I was simply informing the world what pizza was like in the place where it all started. I enjoy all types of pizza, and “Roman” style pizza, by the meter, cut and weighed with its thin and crisp crust, is one of my favorite things to eat.

2) There was going to be an EXPLOSION of Neapolitan Pizzerias.
Now with the Internet and blogs and apps etc, anyone can do, or badly copy, what someone thousands of miles away is doing. Dress, Eating, Lifestyle, Philosphies. ANYthing. Nothing feels like a unique experience anymore. It was only a matter of time before people started prostituting Neapolitan Pizzas.

3) The “explosion” would die down and some people would get sick of it.
Ahhhh, America. The land where things are made fun of, only to be embraced later without remembering the prior insults, and over-done SO much, the time comes when everyone hates it. See : Anything in women’s “fashion”.

4) Neapolitan pizzas would initially be insulted only by people who insecurely craved the ability to pull it off.
Some people actually were skeptical of Neapolitan Pizza. After putting themselves on the pedestals where all can ask for their “expert” opinions formed through countless wikipedia searches, they faced a dilemma. WHAT do they promote now? Man hates what he does not undertsand. Eventually, EACH one of these people has turned to Neapolitan pizza and embraced it.

5) The real-deal pizzerias will still remain when all the “hype” settles.
See them filled with loyal customers and not schmucks with their Time-Out magazines opened, in-hand, on the page that instructs them how to order what they specifically tell you to, and MAKE SURE you say out loud you like it….because that differentiates you and makes you better. BUT SHHHH. A few thousand others are doing the same thing! Ever see the American Psycho scene, where Patrick Bateman tells his date what she will eat? He obviously was repeating what he was told to order at the restaurant he HAD to dine at. 99% of the time, these articles are written by people who have zero background or knowledge on what they are writing about and JUST found out what it is they are describing !!!

6) The decline of Italian culture in Italy by Italians happening at the same time America awakens and discovers better stuff, resulting in some Americans incorrectly concluding Neapolitan Pizzas in America and Italy were the same in quality all along !!!
Italians, especially the youth, find it easier to take the 3,000 year burden of the richest history and culture in the world off their shoulders and embrace ANYthing non-Italian and less inspiring. At the same time, some Americans eagerly started plunging into the world of the unknown and newly discovered, out of pure interest and love. Other Americans just wanted to reject, hide, and move on from, what they feel is their embarrassing past of bad food and generally, bad “culture”. With blogs, airplanes, Neapolitan pizza makers working/teaching here in the States, and the availability of fresh, local products and good imported ones, Pizzamakers here stepped up their game dramatically, while in Italy, the situation got worse. Immigrants with no history and/or enough experience are filling the pizzamaker positions all across Italy. Most younger Italians who are taking the jobs are disinterested and apathetic to begin with, so their pizza skills are not what Italy is used to having. And so we now have a more even playing field. This socialism of pizza talents has been brought upon us by the socialism of culture. Destroy the culture and this is what we get. This is why someone can eat at a great Neapolitan pizzeria here in the States and fly to Italy and not notice the big difference that once separated the two nations.

7) If it were not for a select group of people, we would not be where we are.
I will undoubtedly leave out a few people. It is hard to keep this short, so I will just run a few names. Anthony Mangieri of Una Pizza Napoletana. Say whatever you want about him, but if it were not for his disciplined views, there would never have been so much interest over the “mysterious” Neapolitan pizza. What he did took lots of balls. He was only open half the week and only served 4, very expensive pizzas. He knew exactly how to make good pizzas and market them and himself in the process. Brilliant.
Another giant in the pizza game is Roberto Caporuscio of Keste’ and Don Antonio. The cannonball Keste made in the waters of the American pizza world cemented Roberto’s status as THE one to learn from and copy. Not only were people across the world paying top bucks for his pizza classes but his presence opened the floodgates and changed pizza in America forever. I probably annoyed him for all the hours I spent by his side asking thousands of questions about pizza. He answered each and every one. And you know what? Other people who were aspiring pizza-makers did the same thing. They would hound me for any access to him. And if you really want to follow Time Out or any other medium, go back and check what they wrote about him. Speaking of articles, I used to write weekly wine columns for a newspaper called “The Epoch Times”. I stopped once I had enough of them butchering my articles and even changing and misspelling the names of wines and grapes. It made me look bad. I wrote a, if I may humbly say, masterpiece of an article titled, “The Saints of Pizza”, which lauded the talents and works of Mangieri and Caporuscio. The schmucks never published it.
I could not leave out Rosario Procino, who has a fantastic interview on this blog. He partnered with Roberto to change our lives for the better. His continuing work at Ribalta with Pasquale Cozzolino pushes the barriers and understandings of Neapolitan Pizza. See the interview.
For bringing the Salerno side of Pizza to America, hats off to not only Roberto of 089, but also Fabio and his brother Ciro Casella. Their San Matteo pizzeria is so packed, you cannot walk in. But their Panuozzo is worth the wait.
I must also mention the works of Adam Kuban and Ed Levine. If it were not for them, the world of pizza would be smaller for the American looking for more information. Adam Kuban relentlessly ate as many pizzas as any human could and gave as much time it took to write about each pizzeria he visited. And to top it off, they are both nice guys.
Let’s not forget Scott Wiener, who is not only a fellow water sign ( no wonder I like him ! ) but a pizza-holic. He takes thousands of pizza tourists around New York City each year and breaks down all you need to know about the many differences between New York Style pizza, Neapolitan pizza, and all in between. He also has collected more pizza boxes than strippers have dollar bills.
And for spreading pizza outside of New York, people like Jay Jerrier and Dino Santonicola deserve a “hats-off”. Jay Jerrier left his job to follow his dream and he made Texas history.
For her work in showing how the pizza industry grows and where markets are opening, Liz Barrett of PMQ Pizza magazine has been on the forefront for years.
And how can we forget Alberto “Polo” Cretara, who left his role he started since the early 90’s as a Neapolitan hip hop star, to come to America and make Roman style pizza he learned in Rome?
Paulie Gee took a HUGE risk by leaving his secure job and starting anew as a not-so-young pizzamaker/pizzeria owner. His story is a lesson in believing in yourself, now matter in what age or time you find yourself.
I am sure I left out many people, but none of it was intentional.

Thank you all for reading my rant. I love you. I want to make love to all your beautiful faces.