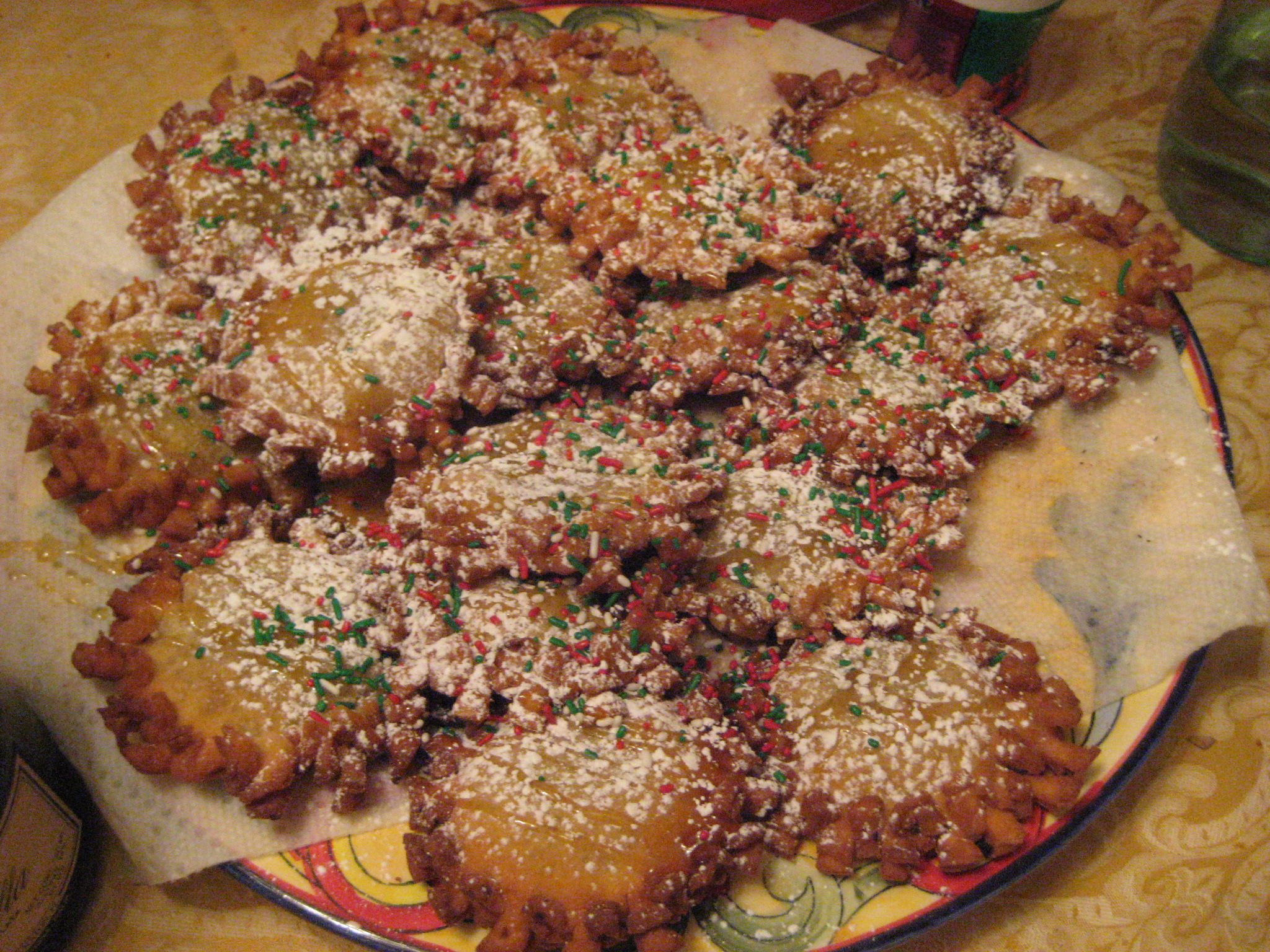 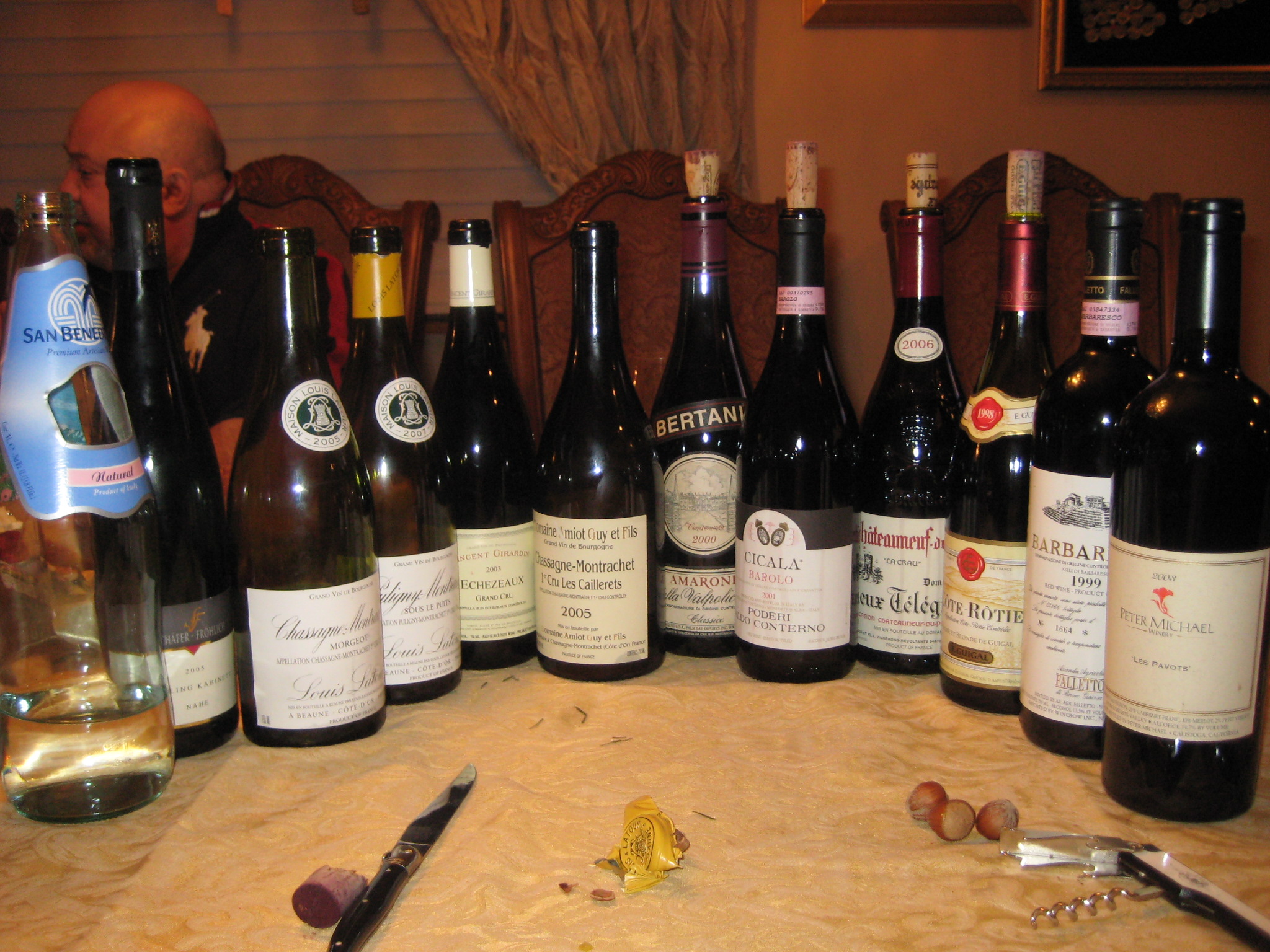 Everyone eats a lot for Christmas and we know Italians love to over-do feasts. But my family and extended family really exaggerate. Growing up, I would go with my immediate family to Zio Peppino’s (my father’s brother) house on Christmas Eve and to my Zia Artemisia’s (my mother’s sister) house on Christmas Day. When Zia Artemisia went back to Italy, her first born son, Antonio, held the Dinners at his house.

Christmas Eve was always beautiful, since it was dark outside, while inside we ate Zia Maria’s (Zio Peppino’s Wife) never-ending seafood based dinner. I never heard of “The Feast of the Seven Fishes” up until a few years ago but I can assure you Zia Maria probably made 77 ! Her Roman roots came through when huge portions of delicious foods weighed the tables down and made our bellies huge. I miss those dinners and her warm embrace because, unfortunately, since we opened the wine store in 1997 and since Christmas Eve is insanely busy, we no longer were able to make it to Christmas Eve dinner at Zio Peppino’s house.

We close Christmas day, so we continued that tradition at Antonio’s house. As I mentioned earlier, Italians exaggerate the amount of food served during the holidays, but Southern Italians are even more extreme. Campanians are even more extreme than their Southern neighbors, and one family in particular, Antonio’s, far outdoes any family….in History. The feasts were so gluttonous, Roman Emperors wouldn’t be able to hang.

My cousin, the late Antonio, along with his wife Eterna and daughter Artemisia, used to begin cooking the night BEFORE, go to sleep, then wake up at 4 a.m. to resume cooking. Antonio was a famous, world class chef, but when Easter or Christmas came along, he let the women in the house take charge. It was him time to relax….and every now and then peek to see if they were doing things up to his standards. Owning high-end restaurants, he made sure each ingredient was of the highest quality.

On my mother’s side, we are 22 cousins and Antonio was the oldest. My mother is one of 9 children (8 girls, 1 boy). In such a chaotic household, one man had a strong grip on the family and everybody did what he said : my Grandfather, Nonno Peppe. Not only were the family meals produced in assembly line efforts by and for a family of at least 11, but Nonno Peppe would constantly invite people over. If no one had been invited yet close to Lunch time (Italians eat their big meals midday), he would stand on his balcony and call people in off the streets. Even the cats would huddle around him for food. Antonio, being the oldest of Nonno Peppe’s grandchildren, went out of his way to continue Nonno Peppe’s tradition of big feasts with as many people as possible. Of course, he also continued my grandfather’s favorite practice, which was that of giving the guest the seat of honor at the head of the table, while he sat beside him. Antonio always bestowed that honor upon my Father.

Any meal with any loved one is always special, but I chose to highlight the ones at Antonio’s house because they went beyond anything anyone could ever imagine, really shock Americans, and are the only ones I have documented . Actually, they even shocks Italians! Around 2001, I started writing down all that we ate because when discussing our Holiday dinners with customers at my wine store, none of them would believe us! Americans were exhausted from cooking 2, maybe 3, things ( since most people never cook throught the year anyway), so I actually started to document it to satiate their curiosities! I have taken pictures too but my blog cannot support that many photos. Below is a list of just one of the many Christmases and Easters we spent at Antonio’s

Families got bigger and work schedules became more hectic, so, after a while,  we weren’t able to have them at Antonio’s any longer. After Zia Maria died and then Antonio too, Holidays aren’t as intense, but with their Spirits, we eat and celebrate like it’s Christmas or Easter, whether we eat multi-course feasts with Pasta, Meats, Fish, Vegetables, etc or just “Pane e Pummarola”.

SIDE NOTE: Since there are WAY too many photos to post, I posted just 2 that are eye-catching. One is a sweet made around the Salerno area called Pasticelle, with a Chestnut-Chocolate stuffing. The other photo is of the wines we drank one Christmas.

Here is the list…and I am NOT making ANY of this up. The dinners would last about 7 hours. I am pretty sure every animal that walks the Earth and everything in the Sea is eaten. Everything was of the highest quaility and cooked perfectly.

Cotechino with Orzo and Lentils