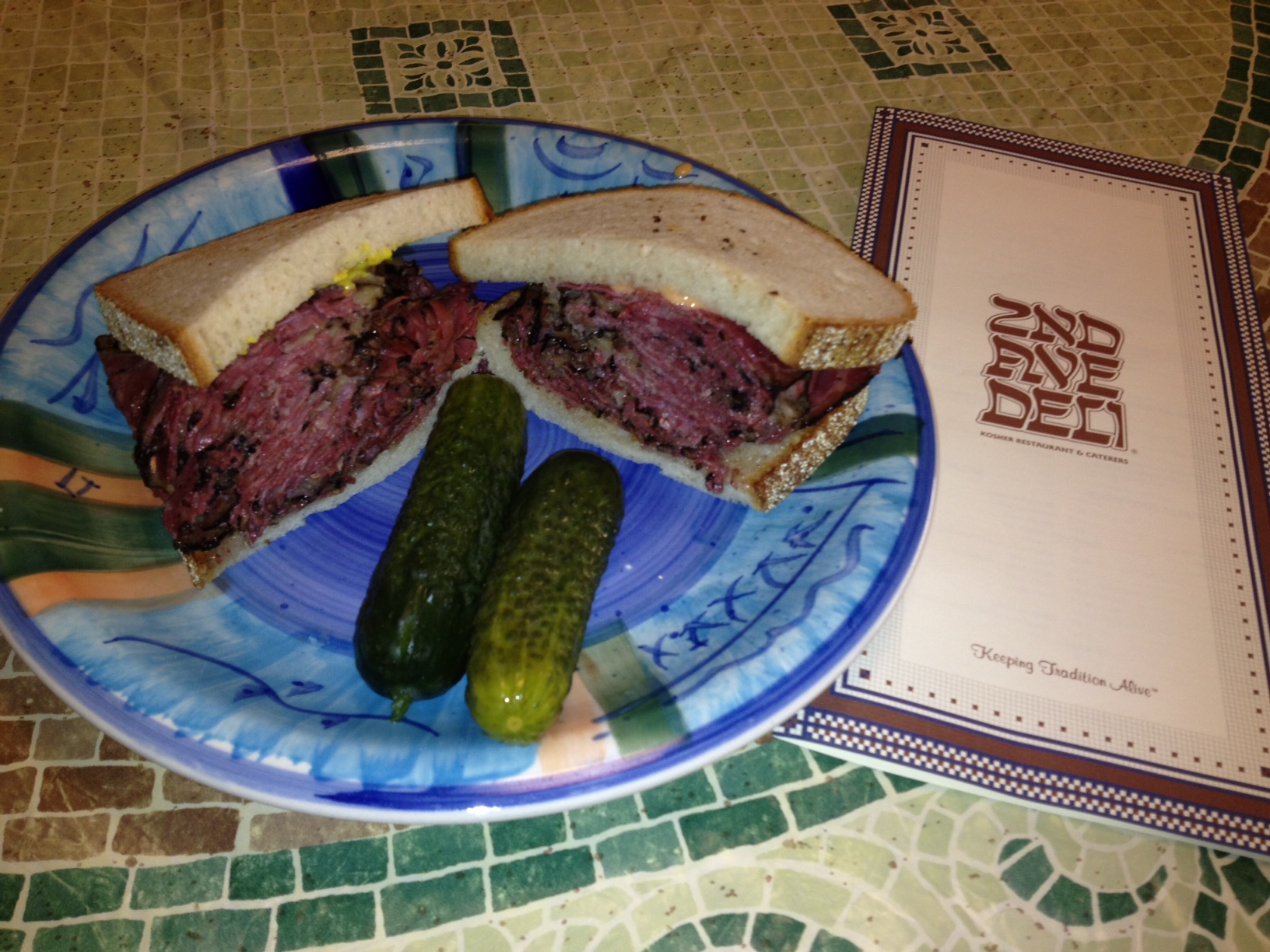 This March 15, 2014 will mark the 10 year Anniversary of 2nd Avenue Deli’s 50 Year Anniversary celebration. Back in 2004, they rolled back their prices back to 1954, the year they opened. Before I explain the economics of what I predicted would happen (and did), first allow me to rant about Pastrami Sandwiches.

While I never liked the American idea of having to overdo EVERYthing, it particularly bothers me when sandwiches are stuffed and stacked so high with meat, it becomes impossible to wrap my mouth around. I am not a whore. Then the sandwich falls apart. Great, you wanted to impress me with a generous portion. Again, I am not a whore. I appreciate quality, not necessarily quantity. I always made an exception for Pastrami Sandwiches. I usually take off the extra 5 or 6 thousand layers and either make an extra sandwich (when I was young, now no longer) or eat the extra pieces with a fork or if I am feeling like my usual savage self, with my hands. I then enjoy a trimmed down Hot Pastrami Sandwich on Rye (sometimes toasted) with Mustard.

Almost every time I order from a Kosher Deli, I feel it is a sin to NOT order Pastrami. Yes, I am aware that Kosher Delis are also known for other things and I do order them, but I almost always leave with what I had in mind. It took me YEARS to accept corned beef, pastrami’s similar, but less spicy, non-smoked cousin, coming from around the same area of the cow. I am very loyal when it comes to everything. While I love Second Avenue Deli’s Pastrami, I believe Katz’s makes the best. Either one tastes great and is very bad for your health.

As for price controls and how they “work”, they do not work but I wish to explain how they play out. First, I must give credit to one of my biggest intellectual influences: Thomas Sowell. What I will write about price controls I learned from him. And I ask for forgiveness if I present it in less of an impressive way than he.

From Diocletian to Nixon, history is more than littered (hosed?) with examples of price controls and the disasters they cause. It is important to first understand the difference between scarcity and shortages. Shortages exist as a price phenomenon. Once you understand that, you will “get” why the exact opposite of a shortage, a surplus, is also a price phenomomon. During the Great Depression, too many price controls, that many times contradicted each other, kept prices artificially set. Food was destroyed to keep prices artificially high. There was food, but people could not afford it. This is not only painful to people who understand economics but even more so to those who went starving during the Great Depression.

The most simple law of Economics is that people demand more at a lower price than at a higher price. On the other side, you have the producers who supply less at a lower price than they would at at a higher price. The role of prices is CRUCIAL to how an economy works. Prices are not made up numbers, plucked out of thin air. Excuse me…they are if you are a fascist and re-set gold prices with an invented number before confiscating gold. See: FDR. In the real world, prices are real things. Prices reflect costs. Prices pay for costs. Prices also work well for naturally rationing resources.

This leads to 2nd Avenue Deli’s roll back of prices to 1954 levels. As the NY POST reported people flooded the restaurant. This was no surprise to people like me who understand Economics. Those who normally would never eat Kosher or even go to that part of town, went out of their ways to get what was essentially free stuff. And why? Again, because people demand more at a lower price than they would at a higher price. Do that to necessities like food and housing and you will have serious problems.

Obviously, this was only for a day, and the restaurant knew it would lose money, but wanted not only the publicity but also to do something nice. It was nice for a day, but could you imagine if there were a national policy that dictated 2nd Avenue Deli do this permanently? Thank God, they have not done that (yet) with 2nd Avenue Deli. Could you imagine if you add to it a monetary policy based on inflation, where the 1954 prices of a Pastrami Sandwich ( 50 CENTS !) rose to 2004 prices ($10.75) and then to 2014 prices ($16.95)? Oh wait…