Rosario Procino
The Man. The Legend. The Neapolitan. 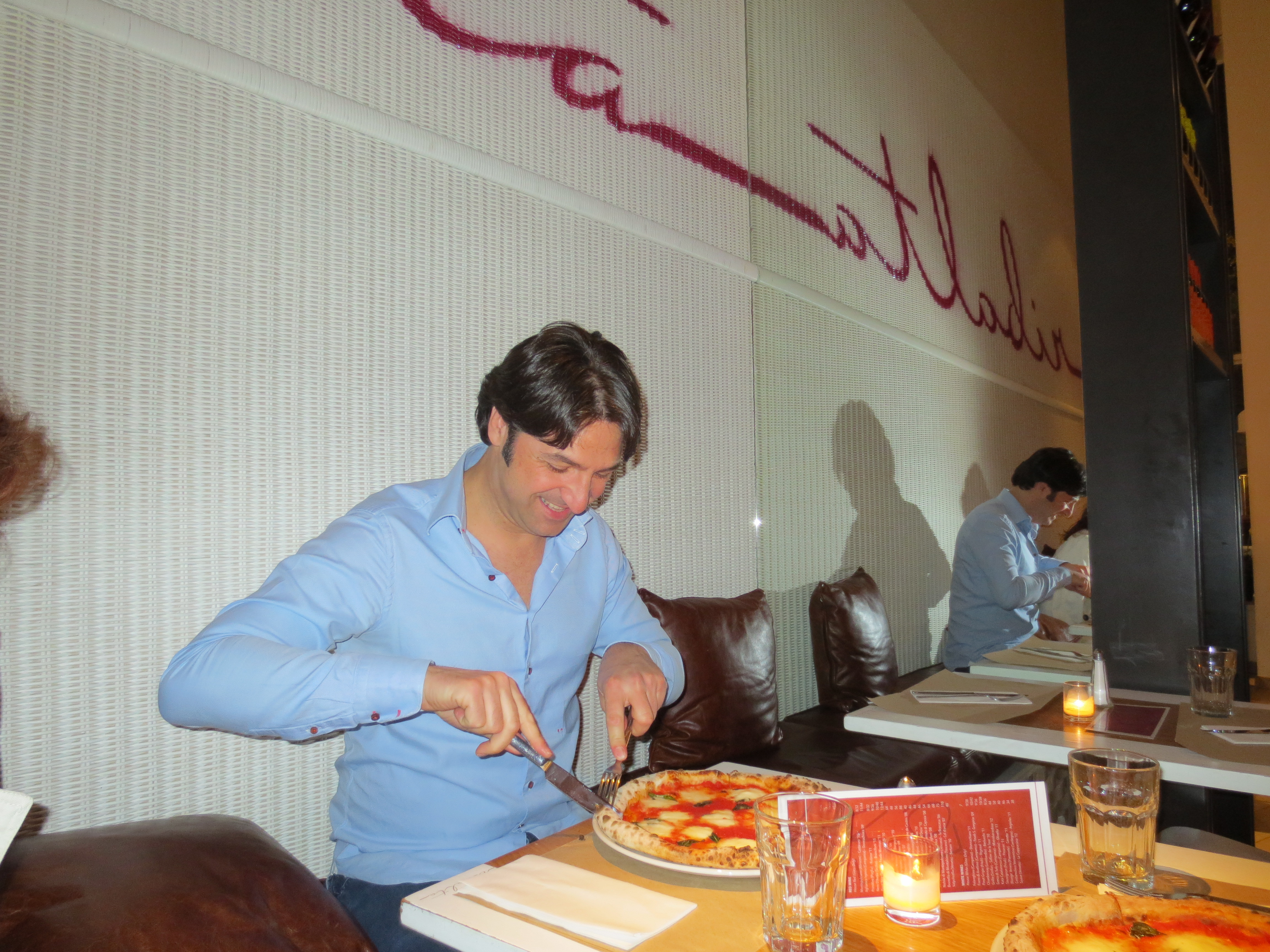 When a man loves a place so profoundly, his roots grow deeply there. From one plant, you can get a whole lot of fruit, all slightly different , but sharing the same attributes. We all heard the expression, “See Naples and Die”. Well, Rosario Procino lives Naples. And that’s all he cares about. Is he Italian? NO! He is Neapolitan. And he will never tire of promoting his city and all the greatness that comes from it. Everyday he plucks a berry off his Neapolitan Tree and offers New Yorkers a taste.

When I first met Rosario many years ago, he was with his partner (at the time) and ready to launch what I instantly felt would be the biggest thing to hit the pizza business in America. They opened Keste’ and the rest was history. Eventually going their own ways, Rosario took over Ribalta Pizzeria, an airy space just south of Manhattan’s Union Square. It had been opened for a year but never took off. It needed somehting. It needed to be Neapolitan.

Partnering up with a fellow Neapolitan, Pasquale Cozzolino, Rosario started the first Napoli Soccer club in NYC at his new restaurant. Other club team fans decided that Ribalta, with it’s mega projector screen, was the perfect place to watch Soccer and playfully mock other teams’ fans. It has become one of the preferred meeting places of Italians in the New York City area.

Typical Aquarius, he knows everyone. He’s always in a good mood and always looks on the bright side. This is why I hate him out of sheer jealousy.

There is a lot of fruit to pick from Rosario’s Neapolitan tree. Let’s pick his brain now:

Rosario, what did you have in mind when you came to the United States?

Nothing, nothing at all. If I had a clear mind to think about something maybe I would have never come !!! It’s fun. Every decision I make, I think about it 1000 times. I do, I don’t. What if I do, what if I don’t …
That time, I just packed and came … for the first (and only) time in my life I followed my instincts.

Did it meet your expectations?

Above and behind so far … even though it’s still a work in progress.
The reason I moved to the USA was to follow my wife and get married.
I have been married for 15 years, I guess I did meet my expectations !
From a business perspective I always said, “By 40, I want to have my own business.” At 40, I sold my first business !!!

Did you ever imagine you would play such a huge role in the pizza business in America?

Not at all, not even in my most remote dreams.
I still don’t think like that, until I get people coming up to me and thanking me for inspiring them. Once I was in a pizzeria not far from where I live, in the NYC suburbs and I started talking to the owner. He was American, so I was curious to know why he started making Neapolitan pizza. He clearly told me he got inspiration from this small pizzeria in NYC. Once I told him who I was, he started thanking me and never ended. He was so happy he could thank me in person to give him the inspiration to start his own business … now we are best friends.

What would you say if your kids wanted to be involved in this business?

I will not enourage them; I will not stop them. I will only tell them to follow their passion.

Where do you see yourself in 10 years?

Leading a pizza Empire !! Ahhhahha .. just kidding … I really don’t know .. I just hope I will still be able to do what I love doing. I’m a computer science Engineer. I worked as an Engineer, I worked in Corporate America, I ran sales for a large food company, I built houses as a General Conractor, I opened restaurants … I have done many things in my 15 years in America. I have been lucky enough that I could always choose what to do. That’s what I hope for my future. Being able to still do what I like, no matter what it will be.

I rather never die !!!! I guess that is not possible, right?
I have always been very practical, I can care less where I die. Who cares at that point? You’re dead, who cares where you are? As all good immigrants, I wish one day I can live 6 months in NY and six months in Napoli … who knows ?!?!?

Do you believe in an after-Life?

How long have you been a Juventus fan?

I will become a Juventus fan 5 seconds before I will die … so everyone can say “One of them died !!!”

(Laugh) Ok, I am sorry, I meant how long have you been an Inter fan ?

Not even after death !!!

Who is your idol? Let me guess: Maradona?

I really don’t have one … Maradona is one of them, my Mom and my dad can be my idols too. You are my idol !!! … I always try to learn the most out of everyone !!! Everyone has something you can learn from and for which to admire.

What would your dream job be?

Working on getting it. Once I get there, I will tell you.

You used to be a volleyball player; do you love it more than soccer?

No way !!! Soccer is soccer. As a child I was not good at soccer. My parents pretended I did sports (and I will never thank them enough for pushing me). I was tall and skinny. I had to pick: either Volleyball or Basketball…so, I went with Volleyball !!!

True. I still believe it. Napoli is a city of its own. Everything there seems to be done on purpose to make your life difficult. It’s very hard for someone with an idea to make it happen. Bureaucracy, corruption, cultural background are just a few, among a bunch of other factors, that will stop you from growing. Things, that in other cities are normal, in Napoli are a mission. Every day you wake up and you must be ready to go on a battle field. A “life” battle field !!!
In Napoli, dreams very often remain dreams. In NY, instead, it is all so much easier. The system helps you to realize your dreams. You have an idea? You find the way to implement it. It can work or not, but you get a chance to try.
In Napoli, it’s the opposite. If you make it there, you really must have balls !!!
If you grow up in Napoli, you will always have that strength and determination that will put you one step ahead of others in other parts of the world. You are used to thinking quicker than others. In many places, thinking quickly is an option, a quality … in Napoli, it is a necessity !!!

Besides some gabagool, brooSHetta, fettucini ( with an i ) by alfred, and a nice Kappacheeno to finish off, what would be your last meal, hoping you wouldn’t get “agita”?

If I have to die as a Juventus fan, I will die eating like shit !!!! Maybe I will be eating McDonald’s!
FOGGHEDABOUDIT !!!